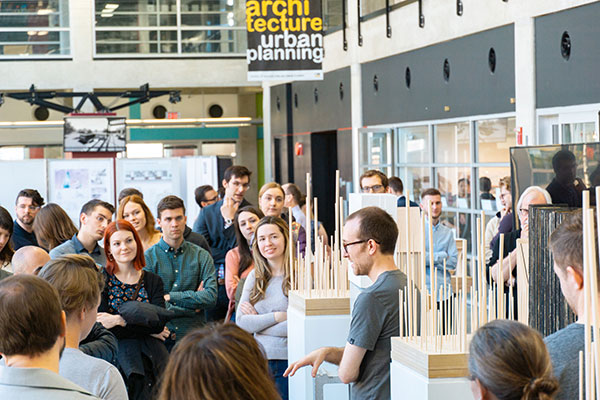 In this exciting, semester-capping showcase of the best of SARUP student work, candidates for the Master of Architecture degree will present projects virtually to their Thesis Committees and the general public. 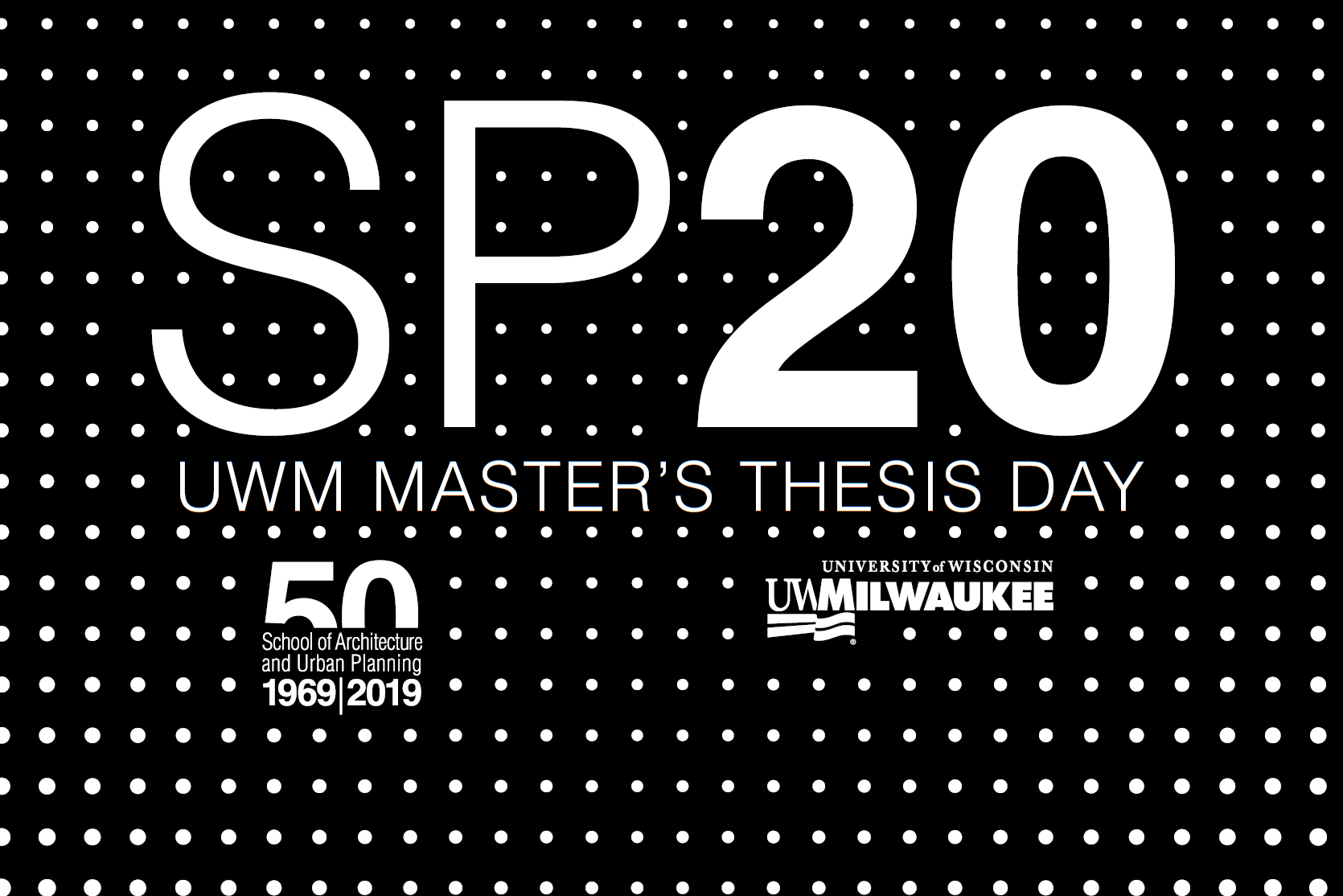 Donna Kacmar
Donna Kacmar currently teaches architecture design studio and is the Director of the Materials ResearchCollaborative. For eleven years she ran her own practice, architect works, inc., dedicated to developing welldesigned solutions for residential and small-scale commercial projects that are straightforward, cost effective and environmentally responsible.

Aparna Dhareshwar
Aparna Dhareshwar completed her undergraduate studies in Mumbai in 1994. She has been responsible for developing uniformly high production standards and monitoring projects to ensure quality are met for all design and contract documents, across the Studio. Aparna has close to 25 years of experience in commercial and residential architectural+interior projects across varied typologies and scale. She has special expertise in Project Management and Client Servicing. She has been involved closely in the execution of Award-winning projects such as Jetavan and Maya Somaiya Library in rural Maharashtra, and the Lattice House in Jammu. She has also been associated with Academy of Architecture, Mumbai as Visiting Faculty. Prior to sP+a, Aparna had her own practice under the name Vistaar Architects, under which she undertook and successfully executed many of the firms commercial and residential architectural projects.

Adam Bastjan
Adam Bastjan’s design work is inspired by his overarching passion for sports and recreation and a deep curiosity in creating thoughtful and unique space. As Lead Designer on Kahler Slater’s Higher Education and Sports + Recreation teams, Adam has extensive experience designing sports, recreation, and wellness projects that enhance the daily lives of those who use them. His work has been recognized with multiple design awards including awards from AIA Wisconsin, ASID Wisconsin, and Athletic Business.

Sarah Lappin
Sarah Lappin is Head of Architecture Dr Sarah A. Lappin is co-founder of the All-Ireland Architectural Research Group, and she is the past Chair of the Steering Group of the Architectural Humanities Research Association. Much of her research and publications in recent years have concentrated on manifestations of identity in 20th century on the island of Ireland. With Dr Gascia Ouzounian, (Oxford University), she is co-director of the research group Recomposing the City. The group, awarded a grant from the Arts and Humanities Research Council, asks how a consideration of sound and sound art methods can impact on the making of cities.

Paul Dolick
Paul Dolick aims to bridge the gap between academia and progressively-minded professional practice by addressing notions of public space, socio-political engagement, and the adaptive re-use of existing buildings and infrastructure. Having worked in a series of marquee offices including Studio Gang in Chicago, MVRDV in Rotterdam, and Kongats Architects in Toronto, Paul often takes a journalistic approach to design through a process of careful listening and editing. Prior to joining SAIC-AIADO, Paul taught at the University of Toronto and the University of Waterloo.

Michael Hughes
Michael Hughes attended architecture school at the University of Virginia and Princeton University. Michael Hughes is a professor at the American University of Sharjah, (AUS) focused on a collaborative form of full-scale, hands-on teaching known as ‘design-build’. Design-build engages students in a complex educational experience that integrates the art and craft of making with issues of civic, ethical and social responsibility. Located in the boundary between architecture, interior design and landscape these projects seek to create experiential delight out of small-scale design opportunities.

Ariela Katz
Ariela H. Katz is an architect and architectural historian, educated at Yale (BA), Columbia University GSAPP (MArch) and The Institute of Fine Arts, NYU (PhD). Dr. Katz is currently an associate professor at the École nationale supérieure d’architecture (ENSA) Paris-Malaquais, where she teaches both architectural history/theory and studio. She is a member of the UMR AUSser research center of the CNRS. Previously, she was Paris director and adjunct associate professor at Columbia University GSAPP’s New York/Paris Program. She has also taught at the ENSAP Lille, the ENSA Versailles and the ENSA Paris-Belleville. Dr. Katz’s research focuses on the intersections of ideology and aesthetics in interwar European architecture; exchanges and interferences in modernist architectural culture between Europe and the Middle East; and critical reevaluations of recent theory and practice. She is the recipient of fellowships from the Graham Foundation, the SAH and NYU. She serves on the governing faculty committee of the ENSA Paris-Malaquais (CPS), as well as on the editorial board of Profiles, the journal of the Association de l’histoire de l’architecture (AHA).

Palmyra Geraki
Palmyra Geraki is a licensed practicing architect and educator. Before founding her own practice, Palmyra worked on affordable housing and other mission-driven projects as Project Manager/Project Architect at Leddy Maytum Stacy Architects in San Francisco and on a wide range of mid-rise and high-rise residential and commercial projects as an Associate at Pei Cobb Freed & Partners in New York City.
Palmyra teaches at the University of Illinois in Chicago. She previously taught at California College of the Arts in San Francisco and has frequently been an invited juror at Yale, UC Berkeley, Pratt, City College of New York, New Jersey Institute of Technology, CCA, University of Wisconsin in Milwaukee, and UIC. She recently helped organize and participated in a roundtable discussion titled “”No Borders”” at the 2018 Venice Biennale.
Palmyra received her B.A. in ‘Architecture’ and ‘Ethics, Politics & Economics’ from Yale University and her M.Arch. from the Yale School of Architecture, where she was the recipient of the George Nelson Traveling Fellowship. She grew up in Thessaloniki, Greece, and has lived in New Haven, New York, the Bay Area, and Chicago.”

Tao DuFour
Tao DuFour’s work explores the overlaps between architecture, anthropology, and philosophy. His interests are in the phenomenology of perception and corporeity, phenomenological accounts of the experience of spatiality and the “natural” world, and their relationship to ethnographic descriptions of space. He is particularly interested in exploring accounts of spatiality in the Husserlian tradition and the significance of these accounts for the experience of landscape. He has recently written on this theme as a chapter contribution to the Routledge Research Companion to Landscape Architecture (Routledge, 2018). His wider research interests explore the question of architecture’s embeddedness in environmental histories. DuFour was awarded the Rome Prize in Architecture at the British School at Rome. He holds a Ph.D. and M.Phil. in the history and philosophy of architecture from Cambridge University, and a B.Arch. from The Cooper Union.

Danielle Beaulieu
Danielle is a licensed architect practicing in Chicago. During her nearly 7 years at John Ronan Architects she worked on a diverse range of institutional, cultural, and residential projects including the IIT Innovation Center, Independence Library and Apartments, Obama Presidential Center and the Courtyard House. Her innate organizational and analytic abilities contributed strongly to the JRA’s research-based design approach. Danielle’s professional interests include examining the relationship between the environment and social behavior in urban public spaces. She received a Master in Architecture with High Distinction and a Bachelor of Science in Architecture from the University of Michigan.

Carey Clouse
Carey Clouse is an Associate Professor in Architecture and Landscape Architecture at UMass Amherst.  She holds a post-professional degree (SMArchS) in Architecture and Urbanism
from the Massachusetts Institute of Technology and a BArch from the University of Oregon.  Clouse is the recipient of a Fulbright-Nehru Senior Research Fellowship to India and the Enterprise Rose Architectural Fellowship in New Orleans, LA. She teaches courses
that address the overlap between social justice, environmental stewardship, and urbanism.  In an effort to bolster interdisciplinary research and learning at UMass, she teaches in both the architecture department and the landscape architecture regional planning
department (LARP).

Joshua G. Stein
Joshua G. Stein is the founder of Radical Craft and the co-director of the Data Clay Network (www.data-clay.org), a forum for the exploration of digital techniques applied to ceramic materials. Radical Craft (www.radical-craft.com) is a Los Angeles-based studio that advances an experimental art and design practice saturated in history, archaeology and craft. This inquiry inflects the production of urban spaces and artifacts by evolving newly grounded approaches to the challenges posed by virtuality, velocity, and globalization. Stein is author of Trajan’s Hollow, which examines the role of craft and reproduction in the era of digital scanning and fabrication, and co-editor of Dingbat 2.0, the first-full-length publication on the iconic Los Angeles apartment building type. He has received numerous grants, awards, and fellowships, including multiple grants from the Graham Foundation for Advanced Studies in the Fine Arts, the AIA Upjohn research award, and the 2010-11 Rome Prize Fellowship in Architecture. He is a former member of the LA Forum Board of Directors and has taught at the California College of the Arts, Cornell University, SCI-Arc, the Milwaukee Institute of Art & Design, and School of the Art Institute of Chicago as the Mitchell Visiting Professor of Architecture. He is Professor of Architecture at Woodbury University where he also directs the Institute of Material Ecologies (T-IME)

Jori Erdman
Jori Erdman, AIA, is an architect and principal at the design and research firm, ROOM as well as Associate Professor and Area Coordinator in Architectural Design at James Madison University. She was Director at the Louisiana State University School of Architecture from 2009-2018, where she was a founding member of the Coastal Sustainability Studio, an interdisciplinary research entity focused on coastal resilience in Louisiana. She is the author of several publications on resilience including “Architecture of the Coast” in the recent anthology Sustainable Coastal Design and Planning. She previously taught at Drury University; Clemson University and was a Visiting Professor at the American University of Sharjah.

Daniel Gillen
Daniel Gillen is currently a Senior Designer at SOM, leading a CBD Masterplan and mixed use complex in Kunming. Daniel was formerly an Associate Partner in charge of the Lucas Museum of Narrative Art with MAD Architects. Prior to his tenure in Chicago, Daniel worked at MADBeijing, directing two cultural projects in Harbin. The China Wood Sculpture Museum completed in 2012, and the acclaimed Harbin Grand Theater completed in 2015. Daniel also directed MADParis for a thirteen story luxury residential building in France. Upon returning to China he was appointed Associate Design Director for HMD, and led design of numerous mixed use, hospitality and transportation projects. Prior to MAD Daniel worked as Senior Project Architect with Asymptote Architecture in New York. Projects include ArchDaily’s 2009 Building of the Year Yas Island Hotel, and the 38 billion dollar Yongsan IBD Master-plan and Landmark Tower. Daniel was featured in the NYTimes article ‘Building the American Dream in China’. He is co-founder of LCD: Laboratory for Computational Design and a graduate of Virginia Tech. He has taught with Tsinghua University, the Architectural Association, Catholic University and Shandong Architectural University. Daniel has been an invited lecturer and critic at twenty-six universities in four countries including Princeton, Columbia, Tsinghua, Pratt, HKU, and Parson’s.

Sarah Aziz
Sarah Aziz is a Visiting Assistant Professor of Architecture at Texas Tech University. She holds a B.Arch from Liverpool John Moores University and an M.Arch from The School of the Art Institute of Chicago. She is the Director of MOOCH Series, a curatorial practice co-founded with Ben Nicholson in 2016. Her drawings have been exhibited in Tokyo, London, and Chicago, and she has recently been awarded a MacDowell Colony Fellowship. Her work explores ways of circumventing existing, ineffective modes of information distribution and cultural production through fringe research and the production of temporary discursive spaces.

All presentations are free and open to the public.
Additional information about the lectures and exhibitions can be found by contacting the main reception at (414) 229-4014, and by emailing any inquiries to Architecture Chair Mo Zell.