The UWM School of Architecture and Urban Planning introduced the biennial Urban Edge Award in 2006. Modeled after the successful Marcus Prize for emerging architects, and supported by the Wisconsin Preservation Fund and the law firm of Reinhart Boerner Van Deuren, the Urban Edge Award recognizes excellence in urban design and the ability of individuals to create major, positive change within the public realm. This award honors an internationally recognized design professional who brings fresh, innovative, and effective thinking to the field of urban design.

Funding for the Urban Edge Award totals $50,000. An initial prize of $25,000 is awarded to the winner, while another $25,000 is earmarked for a studio to be co-taught with a UWM architecture faculty member.

Dreiseitl’s bi-weekly virtual visits from Germany will help Urban Edge student designers enact a global practice as they research potential linkages between Milwaukee’s hydrological systems, energy systems, and other infrastructure, as we seek to envision a post-carbon, ecologically vibrant future for Milwaukee.

From Waste to Wonder—Working with What Remains.
The goal of the three design workshops was to create a variety of design projects that addressed selected urban sites, situations, and social inequities that are specific to Milwaukee, but similar to scenarios in post-industrial cities throughout America. Each design workshop had a unique theme, site, and cast of characters. The fifteen From Waste to Wonder seminar students developed design projects at a variety of scales that explored issues of urban vacancy, adaptive reuse, and productive landscapes. Students used the power of design to re-imagine a Milwaukee where cultural, social, economic, and environmental issues are foregrounded and fortified.

Urban Edge 2013
(Weiss / Manfredi Architecture / Landscape / Urbanism with Assistant Professor Karl Wallick)
Michael Manfredi and Marion Weiss of WEISS/MANFREDI are expanding the definition of ‘infrastructure’ to address an escalating set of design challenges that are at once cultural, architectural, and environmental, the symposium will host a series of cross-disciplinary talks and discussions between innovative architects, artists, ecologists, engineers, and theoreticians.

Urban Edge 2011
(Herbert Dreiseitl, Atelier Dreiseitl and Associate Professor James Wasley)
German artist and landscape architect Herbert Dreiseitl, www.dreiseitl.net, who specializes in incorporating themes of water into his designs, was the recipient of the 2011 award. The goal of the Spring 2011 studio, taught by Mr. Dreiseitl and Associate Professor James Wasley, was to create visions of UWM’s proposed plan for a ‘harbor campus’ of academic research and industrial incubator spaces marrying environmental sustainability with economic redevelopment, with ecologically restorative water management as the core concern.

Urban Edge 2009
(Elizabeth Diller, Scofidio + Renfro and Associate Professor Mo Zell)
In 2009, the second Urban Edge Award was presented to Elizabeth Diller, principal of Diller Scofidio + Renfro (DS+R), and Professor of Architecture at Princeton University. Her practice is an interdisciplinary practice at the crossroads of architecture, the visual arts, and the performing arts. Ms. Diller teamed with Mo Zell, Assistant Professor of Architecture, to co-teach the second Urban Edge Studio in the second semester core of the undergraduate curriculum. In an effort to introduce a broader definition of architecture, DS+R’s temporary installations served as the pedagogical foundation for the studio in which students proposed a series of installation projects throughout Milwaukee.

Urban Edge 2007
(Julie Bargmann, DIRT and Associate Professor Manu Sobti)
The inaugural award was presented to Julie Bargmann of DIRT (“Dump It Right There”) Studio in 2007. Her Charlottesville, VA based practice seeks to ameliorate postindustrial brownfield sites through ecological and cultural interventions. Julie Bargmann teamed with Manu Sobti, Associate Professor of Architecture, to co-teach the first Urban Edge Studio. Their shared research interest in the cultural and historical palimpsest of a site provided a basis for investigations into Milwaukee’s decaying urban landscape. A week-long DIRT Charrette and Design Competition exposed students from multiple studio sections to methods of analyzing and mapping the city. 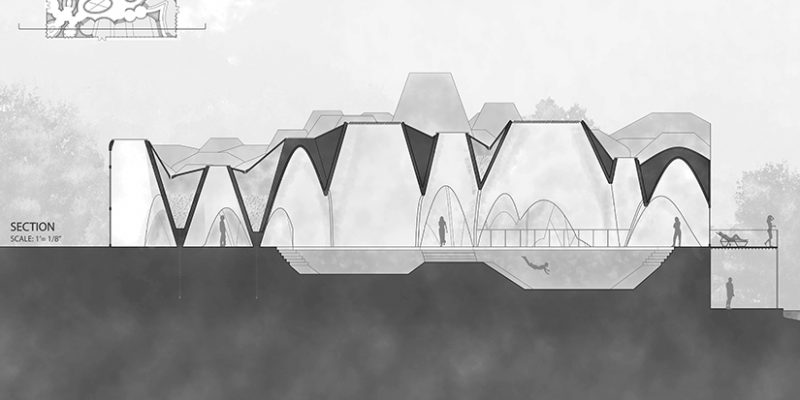 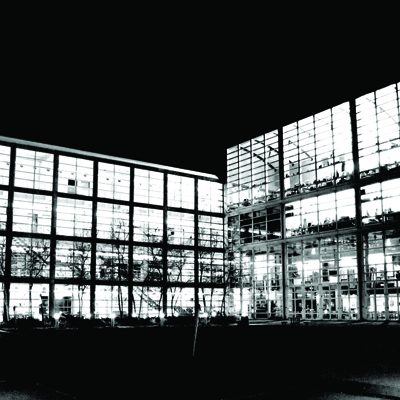 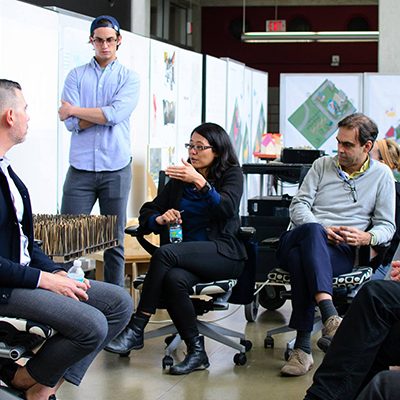