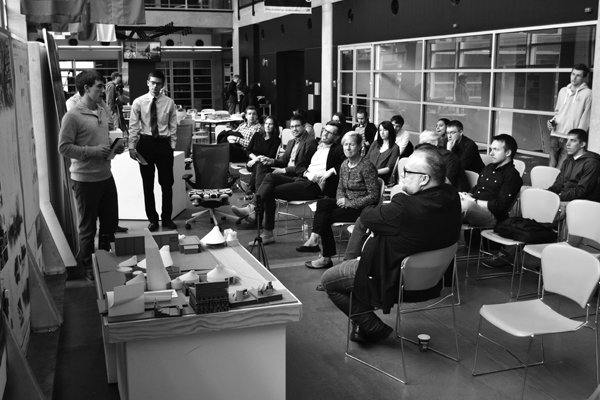 Schedule: 9:00 AM to 11:00 AM
Invited Guests introduced, present their work/practice with respect to the Symposium Theme of “Audience(s),” and announce the nature of the workshop they will be running with their assigned ARCH 320 studio; 11:00 AM to 12:00 PM Round-Table conversation between Invited Guests moderated by Matthew Messner; 12:00 PM to 1:00 PM Lunch provided for Invited Guests and ARCH 320 Faculty only. All SARUP faculty are invited to attend.

Schedule: 1:00 PM to 1:30 PM
Invited Guests are introduced to their workshop students and instructors, and discuss the workshop brief;
1:30 PM to 4:30 PM
Invited Guests engage with Arch 320 students to run an afternoon of workshops and expose them to an alternative mode of architectural production of their choice that engages new and expanded audiences.

Schedule: 5:00 PM to 6:00 PM
presentations by Invited Guests and their workshop students on what they produced;
6:00 PM to 6:45 PM
concluding round-table conversation between Invited Guests and Arch 320 faculty moderated by Matthew Messner;
6:45 PM to 7:00 PM
Closing remarks by Kyle Reynolds and Whitney Moon.

How does/can contemporary architecture address, attract and engage new audiences? Despite our desire to communicate architectural intent, is it possible that we have forgotten to consider who is actually looking at, listening to, reading and/or using what we’ve created? This one-day symposium engages invited guests, along with UWM-SARUP students and faculty, to explore and discuss a variety of alternative modes of contemporary architectural production, including (but not limited to): printed matter, podcasts, animations, videos, exhibitions, performances, wearables, etc. Presentations, round-table discussions, and student workshops will question: Who is your audience? How do you address them? How do you engage them? And how do you attract new audiences?

This symposium is comprised of presentations, roundtable discussions, and workshops addressing the question of “Audience(s)” in contemporary architecture. Six guests—architects and educators, either as individuals or a collaborative practice—discuss how their work addresses the symposium theme. In addition to presentations, and a moderated round-table discussion in the morning, the afternoon engages invited guests with SARUP’s Arch 320 studios in running a series of workshops focused on architectural methods for engaging new and expanded audiences. The “audience-building” focus of the symposium and its affiliated workshops is intended to: 1) engage students, faculty and invited guests in a contemporary conversation about cultivating architectural audiences, and 2) shape the development and production of a “character narrative” pertaining to the Arch 320 students’ design studio brief.

Dan Adams, symposium guest, is an Associate Professor of Architecture at Northeastern University and a co-founder of Landing Studio. Landing Studio is an architecture, design, and research practice whose work negotiates the intersection of large scale global industry with urban environments. Since 2005, Landing Studio has developed projects with port facilities and transit infrastructure entities in Boston and New York by designing shared industrial and public access landscapes, light installations, festivals, exhibitions, tours, and industrial/community operations agreements. The work of Landing Studio has been recognized with awards including a Progressive Architecture Award, the Architectural League Prize, an AIA Institute Honor Award, a Waterfront Center Award, and the Design Biennial Boston. Dan has a BSArch from the University of Michigan, and an MArch from Harvard University, where he received the AIA Medal, and Kelly Thesis Prize, as well as the Druker Research Fellowship for ongoing research studying global production and transport of salt and the unique integration of this industry with cities and ecology.

Joseph Altshuler, symposium guest, and Lecturer at the School of the Art Institute of Chicago is an architectural designer, writer, and founding editor of SOILED, a periodical of architectural stories that makes a mess of the built environment and the politics of space. Joseph is also a founding partner of Could Be Architecture, an architectural design practice that explores storytelling, humor, and character in architecture. Previously, Joseph practiced at offices including Landon Bone Baker Architects in Chicago, Interloop—Architecture in Houston, and ArchitectureIsFun in Chicago. Joseph is the co-author and editor (with Julia Sedlock) of the forthcoming book Creatures Are Stirring: Toward an Animate Architecture.

Ashley Bigham, symposium guest and Lecturer, University of Michigan, was the 2015-16 Walter B. Sanders Fellow at the Taubman College of Architecture and Urban Planning. Prior to her appointment at Taubman College, Ashley was a Fulbright Fellow in Lviv, Ukraine, researching and teaching at the Center of Urban History of East Central Europe. Her work at the Center of Urban History considered the castles and fortresses of Western Ukraine as forces of globalization in defense architecture. As an architectural designer, Ashley has practiced at MOS Architects and Gray Organschi Architecture in New Haven. Ashley holds a Bachelor of Architecture from the University of Tennessee, where she graduated with the Tau Sigma Delta Bronze Medal for best graduating project and a Master of Architecture from Yale University. Her work has appeared in architectural publications including Mark Magazine and CLOG.

Laurel Consuelo-Broughton, symposium guest, is a designer and educator who explores her interests in narrative, material culture, and style within architecture, design, and fashion through projects, publications, and collaborations at a multiplicity of scales. The object as form and cultural figure features broadly throughout all her work. She received her Bachelor of Arts from New York University (NYU) in Comparative Literature and Critical Theory and her Masters of Architecture from the Southern California Institute of Architecture (SCI_arc). As an adjunct assistant professor at the University of Southern California, School of Architecture, Laurel teaches advanced and core design studios as well as seminars on the history, theory, and culture of architecture and design. In the Spring of 2017, Laurel was the Howard A. Friedman Visiting Professor in the Practice of Architecture at University of California, Berkeley College of Environmental Design.s

Andrew Holder, symposium guest and Assistant Professor at the Harvard Graduate School of Design is an educator, occasional author, and co-Principal of The LADG. His research interests include the construction of architecture as an inanimate subject as well as novel methods of engaging historical precedent and the production of complex form in a post-digital discipline. Andrew’s recent work has been published in Young Architects 16, Log, Pidgin, and Project. He is a frequent lecturer and guest critic at institutions across the United States and has held teaching appointments at the University of Michigan, the University of Queensland, the University of California, Los Angeles, Sci-Arc, and Otis College of Art and Design. His design work has received numerous awards including the 2014 League Prize from the Architectural League of New York, multiple citations from the American Institute of Architects Los Angeles Chapter, and the Boston Society of Architects Unbuilt Architecture award. Andrew is a Harry S. Truman Scholar, an Oberdick Fellow at the University of Michigan, and a Robert B. Pamplin Jr. Fellow at Lewis & Clark College. He received a Master of Architecture with distinction from the University of California, Los Angeles and a Bachelor of Arts in Political Science from Lewis & Clark College.

Sean Lally, symposium guest, is educated and trained in architecture as well as landscape architecture and is a tenured professor of architecture at the University of Illinois at Chicago. Lally is the author of The Air from Other Planets: A Brief History of Architecture to Come. He is the editor and contributor to two earlier book projects (Softspace: From a Representation of Form to a Simulation of Space, Routldege (2006), eds. Sean Lally and Jessica Young and ENERGIES: New Material Boundaries, Wiley Press (2009), ed. Sean Lally and recipient of The Prince Charitable Trusts Rome Prize from the American Academy in Rome in Landscape Architecture and the Young Architects Award from the New York Architectural League. Lally hosts a biweekly podcast called ‘Night White Skies.’ Lally was the founder and director of ‘Weathers’ from 2006-16.

Matthew Messner, symposium moderator, is the Midwest Editor of Architects Newspaper, and an Adjunct Assistant Professor, University of Wisconsin-Milwaukee.

Please checkout Visiting the UW-Milwaukee Campus for transit and non–motorized options and parking.

Get directions to The School of Architecture and Urban Planning building at the University of Wisconsin-Milwaukee is located at 2131 East Hartford Avenue, Milwaukee, Wisconsin.