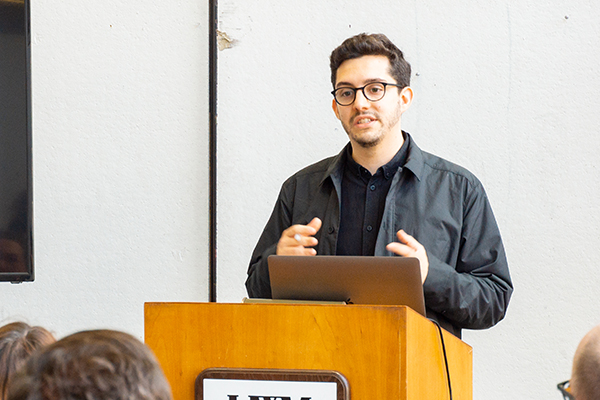 Architectural designer, researcher, and educator José Ibarra joined the School of Architecture & Urban Planning from the East Coast for the 2019-20 academic year. Prior to his year at UWM, Professor Ibarra attended and taught courses at both Princeton University (M.Arch II) and Cornell University (B.Arch). Ibarra has practiced architecture at CODA, Barkow Leibinger, fxCollaborative and Studio Eber, among other firms. He is currently an Assistant Professor in Architecture at the University of Virginia.

As the Urban Edge Fellow, Ibarra investigated design tactics for environmental remediation and justice that could work across different temporal scales, including deep time. Ibarra’s Fall 2020 Fellows Lecture situates architecture within the urban traumas arising during the Anthropocene in his presentation, “Architecture After the End: A Call for Geoempathy.” The world ended in 1784, says Timothy Morton, “when James Watt patented the steam engine” and humanity turned into “a geophysical force on a planetary scale.”

This call for “Geoempathy” considers our present as an aftermath, a turn of events in which biological and geological matter are no longer independent, but instead enmeshed with and indistinguishable from one another. Today’s urban traumas urge us to look at the earth as the physical and metaphorical ground for architecture in the Anthropocene. Ibarra collapses geological processes and design to substitute form with process, extend architecture’s temporarily for centuries, and expand our discipline’s constituents to be more than human.

During his presentation, José will shared glimpses of his companion ephemeral installation, “End Times: The New Architecture,” a virtual display of architecture’s agility and versatility amidst environmental uncertainty and climate crisis.