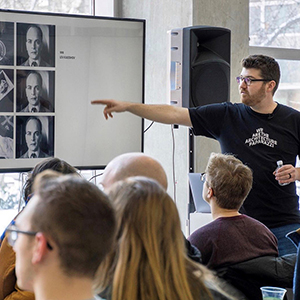 Adam Goss, Founder and Director of Spirit of Space, is an architect, designer, and filmmaker. He co-founded Spirit of Space in 2006 with RedMike Marianek based on the belief that buildings tell stories. As a team they have become the architecture paparazzi with a filmography of over 200 film shorts for architects and designers such as Jeanne Gang, Steven Holl, Amanda Williams, Wolf Prix, and Daniel Libeskind. His films forever document the contemporary experience of visiting the best design landscapes, buildings, and structures. Through an independent lens, they cultivate empathy for people and place. Spirit of Space films are exhibited in museums, biennials, and galleries, but in keeping with their belief that design should be accessible to everyone almost all of their work is found online and distributed through educational lectures and public events.

Dimensions of Citizenship, US Pavilion Venice Architecture Biennale 2018, with Studio Gang
Stone Stories and Amanda Williams Thrival Geographies (In My Mind I See a Line)

In search of a new Ouagadougou, Venice Architecture Biennale 2016, with Architect Francis
Kere

EX of IN, Steven Holl Architects featured in the 2017 Architecture and Design Film Festival NYC