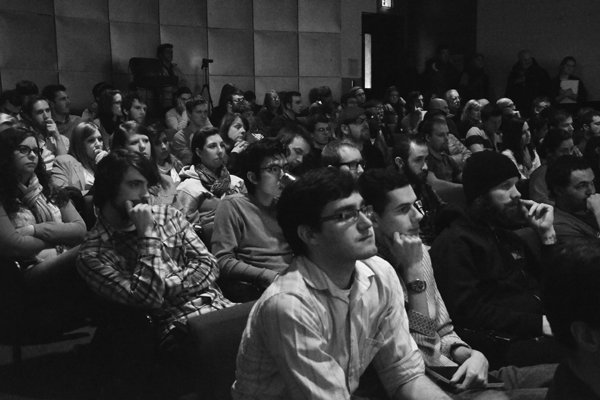 Unfortunately, our speaker’s flight was cancelled this morning so tonight’s lecture is cancelled

Dominic received his Master of Science in Advanced Architectural Design from Columbia University, graduating with Honors, and his Bachelor of Architecture from California Polytechnic State University, San Luis Obispo. He has lived and worked in Shanghai, Paris, and New York. Prior to founding Leong Leong, he worked as a project director at Bernard Tschumi Architects on large cultural projects in Europe, including the Limoges Concert Hall. In 2007, he was awarded the Architecture League Prize by The Architectural League of New York. Dominic has received recognition for his work that includes a Graham Foundation Grant for his interest in the role of research in contemporary architectural education and practice and a grant from the New York State Council on the Arts. Dominic is currently Adjunct Assistant Professor at the Columbia University Graduate School of Architecture, Planning and Preservation, where he teaches Advanced Design Studio. He has organized and participated at many conferences and public speaking events, including the conference “Para-theses” at Columbia University’s GSAPP. He has been invited to speak about Leong Leong’s work at a wide range of institutions, including Columbia University, Princeton University, UCLA, Yale University, American Institute for Architects, and the US Pavilion at the 14th Venice Biennale. Dominic also founded the art publication White Zinfandel and has been featured in The New York Times, Dwell, The Los Angeles Times, CNN, Surface, and ArtInfo.

Leong Leong was established in New York in 2009. Over the past several years, the studio has been increasingly focused on projects that inhabit the blurry boundary between culture and commerce, public and private, figure and field, domestic and monumental, diagram and effect. The studio’s interests are not defined by a particular project type, but by the potential to create environments and artifacts with cultural resonance. Leong Leong’s work includes a wide range of project types, including buildings, interiors, exhibitions, and furniture, with completed projects in New York, Los Angeles, Tokyo, Hong Kong, Seoul, Venice, and Napa valley. In 2011, Architectural Record magazine featured Leong Leong as one of seven emerging architecture firms from around the world in their annual Design Vanguard issue. Leong Leong has been a finalist for the MoMA PS1 Young Architects Program and was awarded a grant by the New York Council of the Arts in 2013. In 2010, the American Institute of Architects selected Leong Leong for its New Practices award. The firm’s work has been featured in The New York Times, Wallpaper, Surface, Monocle, Dwell, CNN, Interior Design, Detail, A+U, Architect, Architectural Record, Pin-Up, and other international press outlets.

Please checkout Visiting the UW-Milwaukee Campus for transit and non–motorized options and parking.

Get directions to The School of Architecture and Urban Planning building at the University of Wisconsin-Milwaukee is located at 2131 East Hartford Avenue, Milwaukee, Wisconsin.

All lectures are free and open to the public.
Additional information about the lectures and exhibitions can be found by contacting the main reception at (414) 229-4014, and by emailing any inquiries to Gil Snyder.