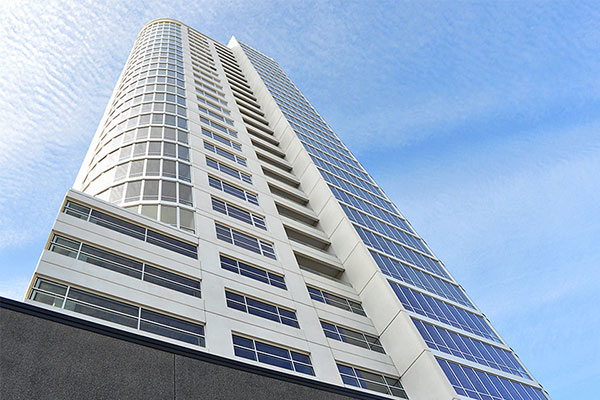 Milwaukee is a city with a notoriously modest skyline. Matt Rinka is a modest, but extremely talented, Milwaukee architect.

However, this humble architect is going to change Milwaukee’s humble skyline.

“I would say in the past 30 years of being involved in (the Milwaukee commercial real estate industry), I would put him among the most talented architects I’ve run across in this city,” said Joel Lee, president of Milwaukee-based Van Buren Management Inc., one of the largest commercial property owners in downtown Milwaukee. “He can certainly compete with anyone from Chicago and anybody else.”

Rinka, 37, is the owner and principal of Milwaukee-based Rinka Chung Architecture Inc. Usually, he is more comfortable talking about the projects his firm has done than about himself.

“We’d much rather our clients have the limelight,” he said.

Although Rinka Chung is a small firm with only 18 employees, it is doing the design work for two of the largest and most high-profile developments currently planned or under construction in downtown Milwaukee:

Rinka is quick to credit his employees’ contributions to the firm’s work.

Construction began recently for The Moderne. J.H. Findorff & Son Inc. is the construction manager for the project.

“(The Moderne) is a gorgeous building,” said Department of City Development Commissioner Richard “Rocky” Marcoux. “This will be a signature building for this city.”

The Godfrey and Kahn law firm recently announced that it plans to move its offices to the Washington Square project. Irgens and Van Buren are trying to attract additional tenants and obtain financing for the project. If built, Washington Square will be the tallest office building constructed in downtown Milwaukee in about 20 years.

The Washington Square project was Rinka’s first after he left his previous job with Milwaukee-based Kahler Slater Inc. to start his own company in 2006. Lee hired Rinka to work on the project, and today Rinka considers Lee to be a mentor.

“Joel has taught me a lot of the business concepts of what we do,” Rinka said.

The Moderne ..this 30-story residential building, designed by Rinka Chung Architecture Inc., is under construction southwest of old World Third Street and Juneau Aveune in Milwaukee.

Rinka was born in Seoul, South Korea. Chung was his birth name, which he incorporated into the name of his company.

When Rinka was 5 years old, he was adopted by Jon and Michele Rinka, who raised him in Oconomowoc. Jon was a French and music teacher at Sussex Hamilton High School, and Michele was a kindergarten teacher prior to adopting Matt.

“I wanted (to experience) a completely different setting than Milwaukee,” he said. “I just wanted to explore something different. I was always attracted to the West Coast and the Pacific Northwest. As a Wisconsinite, I didn’t know anything about Seattle. And then when you get out there, you realize how beautiful it is.”

While in Seattle, Rinka worked for Callison Architecture Inc. The firm has designed several high-rise buildings in Asia. While he worked there, Rinka worked on a visitor’s center project for the Seattle Space Needle.

After receiving his master’s degree, Kahler Slater offered Rinka a job, so he moved back to Milwaukee and worked for about two more years with the firm.

“I kind of made a promise to my wife, who came to Seattle with me, that I would go wherever she wanted afterwards,” Rinka said.

Then in 2003, his wife, Katie, landed a job in Connecticut, and the couple moved to New York. Rinka got a job with daSILVA Architects in New York City. A self-described workaholic, Rinka worked at daSILVA during the day and continued working for Kahler Slater at night on a part-time basis. While at daSILVA, Rinka did extensive design work for the NYU Medical Center.

“It was a great experience, a great little firm that just did great work,” Rinka said. At daSILVA, Rinka said he learned about the importance of designing buildings that not only provide a needed space, but also functionally help the clients solve their problems.

“That was a great learning experience for me,” he said.

After a year in New York, Kahler Slater made Rinka an offer that he could not refuse to return to Milwaukee to work for the firm again full-time.

Kahler Slater executive officer Jim Rasche said the firm wanted to bring Rinka back to work on a hospital project for Grand Itasca Clinic & Hospital in Grand Rapids, Minn. The hospital wanted a building with a modern interpretation of Scandinavian design, and Kahler Slater executives felt Rinka would be a good fit for the project.

“We kind of lured him back to Milwaukee,” Rasche said. “We love attracting talented people to the firm, and we saw Matt was one of those individuals.”

Rinka said he and Katie, who is from Burlington, had planned to return to Milwaukee after a few years on the East Coast, but Kahler Slater’s aggressive offer made them come back sooner.

Rinka said he loves Milwaukee, and his passion for the city grew after living in great cities on the coasts.

Rinka’s love for Milwaukee was one of the main reasons he decided to leave Kahler Slater in 2006 and start his own firm. Kahler Slater was doing more work on major projects in other parts of the country, but Rinka primarily wanted to work on projects in Milwaukee.

“We’re just glad he decided to (start the company) in Milwaukee,” Rasche said. “He’s a talented guy, and we’re glad to see him stay in Milwaukee, rather than take that talent to a bigger city.”

Starting his own firm was “the scariest career decision I ever made,” Rinka said. “It’s like stepping off the edge of a cliff and hoping that there is something there to catch you. I was lucky and fortunate enough to meet up with a few clients who gave me projects. Also, I was hired back as a consultant to Kahler Slater.”

Washington Square was the first project Rinka took on after he started his own firm in 2006. The Washington Square site is a vacant lot at a prime location right in the middle of the central business district and just east of the Pfister Hotel.

“Joel (Lee) has always said this site is too valuable to just develop anything on it,” Rinka said.

The design for Washington Square is a glassy tower, but with building facades angled so the building will look different from each angle and will get different sunlight reflection from each perspective.

When Van Buren was shopping the Washington Square project to Associated Bank several years ago, the company showed renderings by Rinka and a Chicago architectural firm.

“Everbody seemed to like (Rinka’s) drawing the best,” Lee said. “We adopted it, even though Associated Bank didn’t go forward with the project.”

Near the end of 2006, Rinka met Rick Barrett, owner of Barrett Visionary Development, and Tan Lo, who are the lead investors in The Moderne project. At that time Barrett and Lo were just beginning the project and they hit it off with Rinka, who shared their passion for Milwaukee and understood the vision they had.

“Everybody says you have to go get someone from Chicago to design a great project in Milwaukee. I think Matt has proven that is not true,” Barrett said. “He has fantastic design skills and has great vision, great style and great taste. I think his upside is huge.”

While working at Kahler Slater, Rinka did several health care projects, including work on the 12-story Heart Tower addition that was built at Aurora St. Luke’s Medical Center on Milwaukee’s south side in 2004. That health care background has helped make Rinka an extremely efficient architect able to maximize the use of the space he designs in a building, Barrett said.

“The Moderne is a model of efficiency,” Barrett said.

Barrett is also from the Milwaukee area. He and Rinka share a passion for great urban design and for Milwaukee.

“This project was a labor of love for both of us,” Barrett said. “We want it to be a great project that everyone in Milwaukee will be proud of. It means a lot to us. We want to do our part to help make Milwaukee as cool as it can be.”

The Moderne will be the tallest building on the west side of the Milwaukee River in downtown Milwaukee. The vision for the project was to create a cool urban residential building for a mix of household income levels. The building will have 203 apartments, with rents ranging from $1,193 to $4,469, and 14 condominiums priced between $243,000 and $2.5 million.

“The idea was to create a multi-diverse, in age and background, residential building that captured the coolness of the 1930s and 40s but was still modern,” Rinka said. “The Moderne has always been not about the high end of the city, or the low end of the city, but the whole spectrum.”

The Moderne’s best attribute might be its views of the skyline, Milwaukee River and (for some units) Lake Michigan.

“It’s a perspective that no one’s ever had in the city,” Rinka said.

“I just get a thrill out of going to Hollander or Trocadero or Nomad and being able to say we had an influence in helping to bring these cool places to life,” Rinka said.

Rinka Chung also did the design work for Benelux Grand Café and Market, which Lowlands Group will open in the former Good Harvest Market building at 346 N. Broadway, kitty-corner to the Milwaukee Public Market in the Historic Third Ward. The project, which is under construction, will include the addition of a large rooftop patio on top of the building. The project is expected to be completed in May.

“I think the commonality of all of our clients is they all have a have a love for Wisconsin, a love for Milwaukee,” Rinka said.

As an architect, Rinka says he has a passion for great urban buildings and likes to create designs that generate enthusiasm. Rinka said he strives to create timeless modern designs for buildings, not trendy designs that will seem dated years later.