Virtual Colloquium: The Warrior that Wasn’t: Politics and the Archaeology of Gender presented by Dr. Bettina Arnold

The Warrior that Wasn’t: Politics and the Archaeology of Gender

The intersection between gender politics and nationalism in the interpretation of the prehistoric past in west-central Europe is a complex topic that includes the way the roles of men and women are perceived in contemporary society – as complementary or hierarchical, as supporting or competing entities. The history of the interpretation of two high status elite burials dating to the Iron Age in Burgundy, France discovered six decades apart will be used to illustrate how gender stereotypes and nationalism are intertwined in archaeological research in western Europe. The first of these burials was discovered in the 1950s at the site of Vix/Mont Lassois while the second was excavated in 2014 at the site of Lavau, about 72 km away. In both cases the grave good assemblages in these exceptionally richly outfitted graves have been interpreted through the lens of contemporary gender politics, reducing what a nuanced relationship between power, status and social role in Iron Age society to a binary categorization that emphasizes the association between masculinity and violence while ignoring the possibility of pathways to power that do not depend on the threat or application of force. These two burials illustrate how unexamined attitudes toward gender impact other aspects of archaeological interpretation and continue to hamper contemporary scholarship.

Professor Arnold studies the pre-Roman European Iron Age, and in the course of her career she has also participated in archaeological projects ranging from the Middle Bronze Age through the early medieval period in western Europe. Since 1999 she has co-directed a research project in southwest-Germany focused on the burial record of the early Iron Age Heuneburg hillfort and its environs. Finds from those excavations were featured in Die Welt der Kelten: Zentren der Macht – Kostbarkeiten der Kunst, a major exhibition in Stuttgart in 2012-2013. Dr. Arnold has published about the archaeological interpretation and analysis of complex societies, particularly as reflected in mortuary contexts; material culture as a symbolic system and a means of communicating social relationships; the archaeological interpretation of prehistoric gender configurations in burial contexts; and the socio-political history of archaeology and museum collecting, especially their involvement in identity construction in 19th and 20th century nationalist and ethnic movements in Europe and the United States. She published a ground-breaking and widely reprinted article on the use and abuse of archaeology for political purposes in Nazi Germany in Antiquity (1990). She is the founding Editor of the on-line peer-reviewed journal e-Keltoi and a member of numerous editorial boards, including the History of Archaeology series for Oxford University Press and the History of Archaeology Commission of the UISPP.

Please RSVP in advance to brodwin@uwm.edu in order to be admitted to this zoom event. Thank you.

AIA Lecture: Andrew L. Goldman presents “Helmets from the Sea: Military Finds from the Battle of the Aegates Islands (241 BCE)” 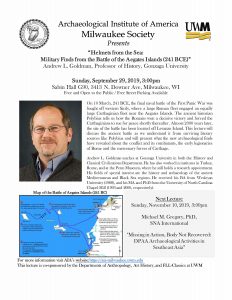 Colloquium: “He has many needs”