This year’s recipient of the Wisconsin Archaeological Society Research Award (WASRA) is Megan Thornton, a Masters student in the Department of Anthropology. The WASRA is a competitive award that annually provides funding to students and avocational archaeologists conducting research pertinent… Read More

Traci Billings (MS 2016) was accepted into a funded three-year PhD program at the Max Planck Institute in Jena, Germany, where she will be part of a team examining the use of psycho-active plants among the Steppe peoples in prehistory… Read More

PhD candidate Josh Driscoll has received a Wenner-Gren grant in support of his PhD thesis research on the socio-economic importance of alcoholic beverages in Iron Age Europe. Congratulations, Josh!

The UWM Anthropology Student Union is proud to announce this year’s annual student colloquium with the theme of Power, Politics & Institutions. In an effort to pursue greater inter- and multidisciplinary academic exchange, the colloquium is open to students outside of the field of anthropology. If you have been or currently are working on research related to any or all of these three themes, we encourage you to participate.

This year’s colloquium will be held at the Anthropology Department in Sabin Hall on the University of Wisconsin-Milwaukee campus on April 28th, 2018.

KEYNOTE SPEAKER: Dr. Sarah E. Wagner is an Associate Professor of Anthropology at The George Washington University and author of the upcoming book, Bringing Them Home: Identifying and Remembering Vietnam War MIAs. Her work focuses on the nexus of power, politics and institutions by tracing shifting civil-military relations and notions of national belonging through recovery and return of remains to surviving families.

ABSTRACTS: The colloquium is open to undergraduate and graduate students from any social science field who are currently working on research related to Power, Politics & Institutions broadly defined. We welcome research from any methodological background.

To apply to participate, please submit an abstract of no more than 300 words along with a title and keywords to uwm.asu.colloquium@gmail.com no later than 11:59 PM on March 2nd, 2018. Accepted participants will be notified by March 16th and papers will be due for discussant review by April 13th. Presentations on April 28th will be limited to 15 minutes and final papers should be no more than 20 pages double-spaced.

The conference is free and open to anyone interested in this year’s theme. Please direct questions to uwm.asu.colloquium@gmail.com. Further information on registration will be distributed in late February.

The Department of Anthropology notes with sadness the passing of Professor Edward Wellin, a fixture of this department and of UWM for more than 25 years. His influence on our department, particularly in the area of medical anthropology, continues to… Read More

The Department of Anthropology is excited to be co-organizing a night of music and stories by Bieito Romero; a composer, musician and member of well-known Galician folk band, Luar na Lubre. The event will take place on the UWM campus in Curtin Hall 175 on April 18th at 4:00 PM. The event is free and all are welcome.

This program is supported by a Title VI National Resource Center grant.

Congratulations are in order for Jessica Skinner who took second place, out-competing 12 other contestants, in the inaugural Three Minute Thesis (3MT®) event on Wednesday, April 4, 2018. This event was sponsored by The Graduate School, Office of Research, and… Read More

Susan Hill, a Doctoral Dissertator in the Department of Anthropology at the UW-Milwaukee writes in her new article, “#Adulting and the Disordered State of American Adulthood”, about the tough realities of coming of age in America in the new… Read More

Demons in the Dark: Nightmares in Ancient Egypt

Description: The dream in ancient Egypt functioned as a liminal zone between the land of the living and the afterlife. However, the dream was also a phenomenon over which the dreamer had little control, and its permeable boundaries allowed both the divine and the demonic inhabitants of the beyond access to the visible world. Sometimes the result was a positive beneficial experience, as is attested in royal texts and elite hymns that relate the awe-inspiring contact a dreamer could have with a god or a goddess. But another more disturbing belief was that dreams could allow the vulnerable sleeper to be watched or even assaulted by the hostile dead. Drawing upon both textual and material evidence, we explore the identity and nature of the hostile entities who dared to disturb the sleep of the living. Surviving prescriptions, and apotropaic devices attest to the prevalent fear of nightmares while the intricate steps one could take to ensure safety in the night emphasize the tangible nature of these fears. To protect themselves against such demons of the dark, sleeping mortals could access the same potent energies that restored order and kept at bay the chaotic enemies of the sun-god himself. 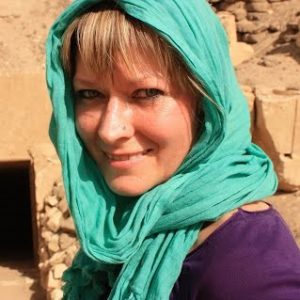 Kasia Szpakowska is Associate Professor of Egyptology at the University of Swansea, and Director of the Ancient Egyptian Demonology Project: 2K BCE. Her research interests are the demonology of ancient Egypt, the archaeology of religion and ritual figures, Egyptian extra-temple ritual and religious practices, gender and daily life in the Late Middle Kingdom and New Kingdom, and dreams and nightmares in ancient Egypt. She is also conducting the experimental archaeology Ancient Egyptian Cobra Project.

Dr. Szpakowska’s recent publications include “Feet of Fury: Demon Warrior Dancers of the New Kingdom” (in Rich in Years, Great in Victories. Studies in Honour of Anthony J. Spalinger on the Occasion of his 70th Feast of Thoth, edited by R. Landgráfová and J. Mynářová, Charles University in Prague, 2016) and “Infancy in a Rural Community: A Case Study of Early Childhood at Lahun” (in The Proceedings of the Xth International Congress of Egyptologists, ed. P. Kousoulis and N. Lazardis, Peeters 2016); she is also the author of Daily Life in Ancient Egypt: Reconstructing Lahun (Blackwell Publishing, 2008) and Behind Closed Eyes: Dreams and Nightmares in Ancient Egypt (The Classical Press of Wales 2003).

PhD candidate Josh Driscoll has received a  Dissertation Fellowship Award from the Graduate School to support his thesis project on the social role of alcoholic beverages in prehistoric Europe. Congratulations, Josh!