Abstract: For more than three hundred years during the Late Bronze Age, from about 1500 BC to 1200 BC, the Mediterranean region played host to a complex international world in which Egyptians, Mycenaeans, Minoans, Hittites, Assyrians, Babylonians, Cypriots, and Canaanites all interacted, creating a cosmopolitan and globalized world-system such as has only rarely been seen before the current day. It may have been this very internationalism that contributed to the apocalyptic disaster that ended the Bronze Age. When the end came, as it did after centuries of cultural and technological evolution, the civilized and international world of the Mediterranean regions came to a dramatic halt in a vast area stretching from Greece and Italy in the west to Egypt, Canaan, and Mesopotamia in the east. Large empires and small kingdoms, that had taken centuries to evolve, collapsed rapidly. With their end came the world’s first recorded Dark Ages.

In this illustrated lecture, based on his book of the same title 1177 BC: The Year Civilization Collapsed; Princeton University Press (2014), that was considered for a 2015 Pulitzer Prize, awarded the American School of Oriental Research’s 2014 prize for “Best Popular Book on Archaeology,” and is being translated into fourteen foreign languages. 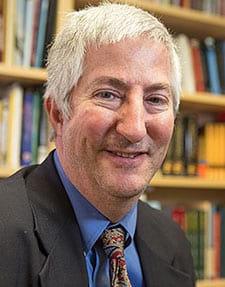 Eric H. Cline is a classical and biblical archaeologist and ancient historian whose primary fields of study are biblical archaeology, the military history of the Mediterranean world from antiquity to present, the Bronze Age Aegean, and the international connections between Greece, Egypt, and the Near East during the Late Bronze Age (1700-1100 BCE). He is director of the Tel Kabri Expedition and co-editor of the Bulletin of the American Schools of Oriental Research

War, Peace, and the Feast: Conflict and Resolution in the Past

War, Peace, and the Feast is a hands-on opportunity to experience the variety of ways that conflicts were contested, resolved, and prevented in the past as revealed in the archaeological record. We present three main themes about ancient conflict. First is the variety of ways in which conflicts could be contested. These contests could indeed be bloody wars, but also could take the form of smaller-scale ritual battles like those which are seen today in Chiaraje, Peru. Myths also tell of sporting events taking place for warfare. Indeed, sports are well-known as a measure for pausing conflicts, as was the case in the ancient Olympics. We might infer that periodic sporting events both created social bonds between participants and released tensions before they could break into bloodshed. Finally, we present feasting as a key method in which social bonds were created as a means to provide stability and prevent conflict. With competitive feasting, we see the themes of War, Peace, and the Feast come full circle.

International Archaeology Day will be celebrated here in Milwaukee on Saturday October 20, 2018, from 1:00 to 4:00 pm on the UWM campus. Come to the first floor of UWM’s Sabin Hall (3413 N. Downer Ave.) and join us for an exciting afternoon doing archaeology with local specialists, ranging from experimental archaeology to helping identify and analyze ancient artifacts! FREE and open to the public. Fun for all ages!

This event is co-sponsored by the Archaeological Institute of America, Milwaukee Society and the University of Wisconsin-Milwaukee Departments of Anthropology, Art History, and FLL Classics Program.

Evelyn Perry is a proud Milwaukee native and Associate Professor of
Sociology at Rhodes College in Memphis, Tennessee. She earned a
Bachelor of Arts in Sociology at Colorado College and holds a Ph.D.
in Sociology from Indiana University. Cities are of great interest to
her because they provide myriad opportunities to investigate how
inequities are produced, perpetuated and challenged. Her research
program examines these processes in the context of neighborhood life—
drawing together the areas of community and urban sociology, culture,
and inequality to address core social science and policy concerns. 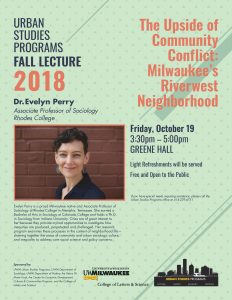 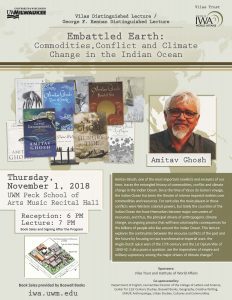 Recent graduate Rick Edwards has been awarded the Midwest Archaeological Conference-University of Notre Dame Press Dissertation Award.   Rick’s dissertation, The Canine Surrogacy Approach and Paleobotany: An Analysis of Wisconsin Oneota Agricultural Production and Risk Management Strategies, was selected by the Editors and Editorial Board… Read More

Abducted Indonesian Mortuary Objects: Museums in the Era of Heritage-Consciousness

This talk examines the rise of “museum-mindedness” (Kreps 1994) in Toraja, Indonesia as well as the local cultural visions and political aspirations for private, family-run museums in upland Sulawesi. Today, decades of mortuary tourism and thefts of sacred ancestral objects, in tandem with rising heritage-consciousness and awareness of Toraja grave carvings in international museum collections, prompt new debates and clashes within and beyond Toraja society concerning the proper care (or guardianship) of both local grave displays and recaptured heritage items. This talk will examine the cultural and ethical complexities of on-going efforts to foster dialogues with Torajan stake-holders surrounding potential repatriation of several sacred Toraja mortuary effigies from American museum collections. It takes up politics and poetics of a newly-established local-government-run Toraja museum, and the distinctive Torajan cultural ideas embodied in its displays, some of which feature recaptured heritage items. Case studies reveal contrasting ideas about cultural displays and museums (their potential authority-building powers, their relationships to various political or religious power bases, and their abilities—or inabilities—to accommodate local sensibilities concerning the realms of life and death).