PhD student Josh Rivers has received the Leifur Eiriksson Foundation Fellowship to conduct his dissertation research in Iceland. The foundation is a more localized version of a Fulbright Commission, more information on the foundation can be found here. Josh will… Read More

Allison Kotowicz, a PhD candidate in the Department of Anthropology, has been awarded the prestigious Fulbright-Hays Dissertation Research Abroad Fellowship for her work with the Maasai people in Tanzania. Read more about her here!

Anthropology Professor Bettina Arnold and PhD candidate Josh Driscoll were invited speakers at the University of Hohenheim in Germany in the European Research Council PLANTCULT Workshop “Ancient Beer: Multidisciplinary Approaches to Identification in the Archaeological Record”, February 7-9, 2019. Their talks were entitled, respectively, Tapping into the Past:… Read More

In partnership with the Anthropology Department at UW-Milwaukee, Brew City MKE will delve deeper than ever before, discussing and tasting what ancient brewing around the world may have been, and the current interpretations now being undertaken in the creative way that only American Craft brewers can produce.

Admission to this World Class Panel Event is $7, Ancient Craft Brew Flight is available for an additional $13 (total for event and tasting is $20).

Come join us for the first WAS talk of the year on February 13, 2019 in Sabin Hall G90 at 7:00 PM to hear Alumnus, Natalie Carpiaux, speak about her work on the Koshkonong Creek Village Site in SE Wisconsin.

See the flyer below for more information! 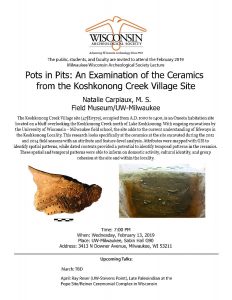