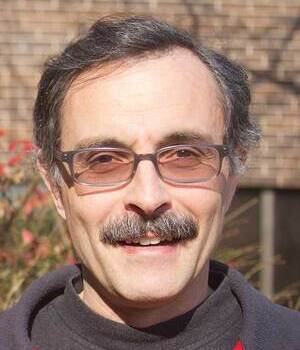 Biological inorganic chemistry is a fascinating and diverse discipline which, as the name implies, draws on aspects of both inorganic coordination chemistry and biochemistry. The subject spans an enormous variety of topics, ranging from chemical synthesis and characterization of novel metal complexes for use as models, to bioinorganic enzymology, and to medicinal chemistry. A unifying theme in my own research has always been a keen interest in reaction mechanisms at the molecular level, and I am especially interested in the reactions of metalloenzymes. Below are brief descriptions of two projects currently under way in the Pacheco group.

The enzymology of ammonia-nitrite interconversion

This project involves an investigation of two multi-heme proteins, cytochrome-c nitrite reductase (ccNIR) and hydroxylamine oxidoreductase (HAO), which allow certain microorganisms to interconvert ammonia and nitrite.  The interconversion is an important component of the biological nitrogen cycle (Fig. 1).  CcNiR catalyzes 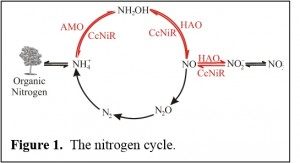 the 6-electron reduction of nitrite (NO2-) to ammonia (ammonium, NH4+).  In this process, ammonifying microorganisms are using nitrite as a terminal electron acceptor during anaerobic respiration (Fig. 1).  HAO catalyzes the 4-electron oxidation of hydroxylamine (NH2OH) to nitrite, as part of a larger process in which ammonia is oxidized to nitrite.  In this case, ammonia oxidizing micro-organisms are using ammonia as an electron donor in aerobic respiration (Fig. 1).  The primary aim of the project is to determine how ccNiR and HAO, which have broadly similar architectures (Fig. 2), are tailored to shepherd the ammonia-nitrite interconversion preferentially in one direction or the other.  Intermediate states that form and decay during the multi-electron redox reactions catalyzed by the two enzymes are being investigated using a variety of techniques, including novel ones such as time-resolved crystallography (which is being applied in collaboration with Prof. Marius Schmidt of the UWM Physics department).

Indirectly, this project is also providing important insights into the growing environmental problem of nitrogen cycle imbalance.  Ammonia (a major component of fertilizer) and nitrite  are two examples of “reactive nitrogen”; that is, nitrogen usable by many living organisms, as opposed to “elemental nitrogen” which makes up 78% 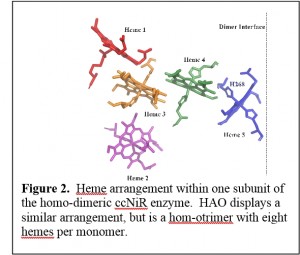 of the air we breathe, but is directly usable by only a few microorganisms.  Over the last 50 years the balance between reactive and elemental nitrogen has shifted significantly towards the former, as more fertilizer was generated to produce food and (recently) biofuels.  This shift is having many unintended negative consequences, which will soon have to be mitigated.  A better understanding of ammonia-nitrite interconversion may lead to the more efficient use of ammonia fertilizer, and thus help redress the imbalance.

A second project being pursued in our group is looking at a Mycobacterium tuberculosis protein known as truncated Hemoglobin N (trHbN).  The protein neutralizes nitric oxide produced by the immune system to kill bacteria, thus helping M. tuberculosis to evade the body’s defenses.  The process by which trHbN neutralizes NO is shown in Scheme 1.  The key reaction is the dioxygenation of NO by oxy-trHbN, which results in formation of the much less toxic nitrate. 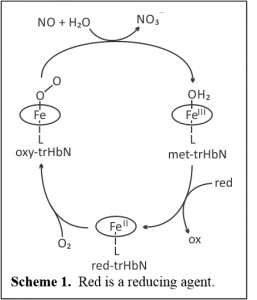 Figure 3 shows the structure of trHbN.  The protein has an extensive tunnel system suitable for ligand diffusion to the active site (Fig. 3a).  In addition there is an extended hydrogen bonding network between residues Y33, Q58 and the bound dioxygen (Fig. 3b), which mutagenesis studies showed to be critical for the protein’s high dioxygen affinity.  Studies by our group and others have shown that mutating these residues also increases the rate at which O2, NO or CO bound to the 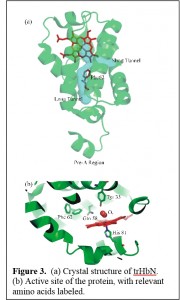 reduced heme, but has little effect on the NO dioxygenation rate by oxy-trHbN (Scheme 1).  It appears that displacement of a non-coordinated distal site water molecule, held in place by tight interaction with Y33, may supply the main kinetic barrier for ligand binding to red-trHbN.  When this residue is replaced, access to the heme for small gases improves.

Away from the heme active site, the trHbN crystal structure reveals a unique motif on its N-terminus that serves no apparent structural purpose, as it protrudes out from the globin fold into the outside solvent (the “pre-A” region in Fig. 3a).  Surprisingly though, deletion of the pre-A region was found to drastically decrease the rate of nitric oxide dioxygenation in steady-state experiments.  Very recently our group showed that the step impacted by removal of the pre-A region was not the NO dioxygenation step itself, but rather re-oxygenation of red-trHbN (Scheme 1).  We have proposed that deletion of the pre-A region abolishes a large-scale conformational motion, which in the wild type helps to dislodge the non-coordinated water that blocks access to the heme from its tight interaction with Y33.  Experiments are currently under way to test this conjecture.