Dr. Christine Sosnovsky joined him a year later in the United States and started at the Illinois Institute of Technology Research Institute (IITRI) in Chicago. Unexpectedly, Prof. Kharasch died in 1957 prompting Dr. Sosnovsky to work as a Senior Scientist at IITRI. In 1963, he got promoted to Associate Professor and was invited as Senior Research Fellow of Public Health Service at the University College in London and the University of Tübingen (1967-1968). Two years later Christine was promoted to Associate Professor as well and taught on the topics of physics and chemistry of solid surfaces.

In 1967, George accepted a position as Professor at UWM and was responsible for the design of the current Chemistry Building. He co-founded the Journal Synthesis in 1969 and served as editor from 1969-1985. Dr. Sosnovsky has authored more than 175 publications and wrote two books. His first book titled “free Radical Reaction in Preparative Organic Chemistry” was published by MacMillan in 1964. He wrote his second book in his 90s titled “Solar-Energy-Absorbing Substances and Oxidative Stress and Inflammatory Diseases”. Dr. Sosnovsky’s interests spanned over a wide range of topic such as research and development of fungicides, herbicides, and insecticides, amidine derivatives as anti-radiation agents, and diazo dyes leading to a commercial copying process. Free radical chemistry in particular metal ion catalyzed redox reactions involving antioxidants and reactions with peroxides resulted in the discovery of the famous Kharasch-Sosnovsky reaction in 1958. Later, Dr. Sosnovsky focused on photochemical synthesis, oxidative phosphorylation reactions, synthesis of spin-labeled phosphorus compounds of biological interest including anticancer agents, organosulfur and organoselenium compounds. In 1980, his reach interest focused on medicinal chemistry, especially on structure-activity relationship of anticancer drugs involving design and biological evaluations. Related to his interest were pursuits in the synthesis of contrast-enhancing agents for diagnostic NMR-imaging (MRI) radiation sensitizers and synthesis of aminoxyl-labeled probes for studies of intracellular environments such as hypoxic cells by EPR and MRI. George was is Fellow of the Royal Society of Chemistry London England. In 2009, Dr. Sosnovsky was made an honorary citizen of the University of Innsbruck for being one of their first graduate students after the Second World War. 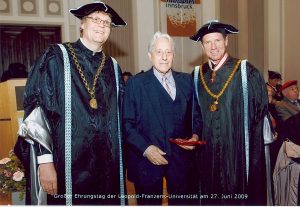 Honorary Citizen of the University of Innsbruck

Dr. Sosnovsky is actively supporting our Department of Chemistry and Biochemistry by providing funds to to invite renowned scientist working in the field of cancer for a two-day symposium in April or May each year. The lecture series started in 1999 and is currently organized by the Division of Organic Chemistry. The following speakers were invited:

In order to support future generations of scientist, Prof. Sosnovsky created the Sosnovsky Endowment Fund provide funding for the “George and Christine Sosnovsky Awards in Cancer Therapy” overseen by the Royal Society of Chemistry (UK). More than nine leading scientist in the field of cancer therapy have already received this award.

In addition, George provided funds for a similar but different award presented by the American Chemical Society. The first “George and Christine Sosnovsky Award for Cancer Research” was received by Laurence J. Marnett in 2012.

Furthermore, the University of Innsbruck, also received funds in order to award the “Georg und Christine Sosnovsky-Preis” for extraordinary dissertation in the Departments of Chemistry and Pharmacy. The award winner this year was: