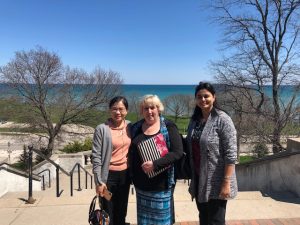 Margaret Brimble is a Distinguished Professor at the University of Auckland, New Zealand. Her research focuses on the synthesis of bioactive natural products and peptides as potential new medicines. She has published more than 500 papers, 60 reviews and is an inventor on >30 patents.

Her first lecture presented on Thursday April 25th 2019 was titled:

“Peptide-Based Therapeutics: Paving the Way from the Lab to the Clinic”The Resurgence of Covalent Drugs”

This lecture will showcase Professor Brimble’s research on the synthesis of peptides, lipopeptides and glycopeptides as a platform for the discovery and development of peptide therapeutics as agents to treat neurogenetic disorders, infectious disease, cancer and diabetes. Professor Brimble discovered the peptide drug candidate trofinetide (NNZ2566) that has been granted orphan drug status and fast track designation by the US FDA and is currently being evaluated in a final phase III clinical trial undertaken by Neuren Pharmaceuticals (see: http://www.neurenpharma.com/IRM/content/default.aspx) to treat Rett Syndrome. Professor Brimble recently co-founded the spin-out company SapVax with $5.5 million investment from BioMotiv in Cleveland, Ohio to develop a suite of “first-in-class cancer vaccines” based on a novel self-adjuvanting peptide chemistry platform for immuno-oncology applications (sapvaxllc.com). She also established a Medsafe NZ-approved laboratory that has manufactured clinical grade peptide antigens for use as vaccines in human clinical trials to treat melanoma.

Her second lecture presented on Friday April 26th 2019 was titled:

Natural products have long been regarded as “Nature’s medicine chest” providing invaluable platforms for developing front-line drugs. The chemical structures of natural products have evolved over several millennia for a specific biochemical purpose and their molecular frameworks can be considered “privileged scaffolds.” This lecture will showcase the synthesis of bioactive natural products and peptides from our own research as examples of unexplored novel structural chemotypes for drug discovery.

Due to the on-going global expansion of antimicrobial resistant (AMR) infections, and the declining proportion of FDA-approved antimicrobial drugs over the past three decades, AMR is now recognized worldwide as one of the greatest threats facing humankind in the 21st century. Antimicrobial peptides and proteins (AMPs) exist widely throughout nature and protect organisms from infection by destroying a broad range of pathogens. Due to the unique and non-specific bactericidal mechanism of action of AMPs, AMPs have a lower tendency to elicit antibiotic resistance than conventional antibiotics, and are potentially useful therapeutic agents. The chemical synthesis and biological activity of several representative examples of antimicrobial peptides/proteins e.g. callyaerin A, snakin-1 and glycocin F, will be described.

Callyaerin A is a proline-rich cyclic peptide derived from the Indonesian marine sponge Callyspongia aerizusa, and is a potent inhibitor of M. tuberculosis. The synthesis1 of callyaerin A focused on installation of the unusual (Z)-2,3-diaminoacrylamide (DAA) unit within the cyclic peptide, which together with the multiple Pro residues in the sequence, influences the topology of the molecule, potentially contributing to its remarkable bioactivity.

Glycocin F is a 43-amino acid bacteriocin2 produced by the Gram-positive bacterium Lactobacillus plantarum KW30 and contains two β-linked N-acetylglucosamine (GlcNAc) moieties attached to the sulfur atom of Cys43 and the γ-oxygen of Ser18. Chemical Synthesis was used to probe Structure-Activity Relationships of this rare glycoactive bacteriocin.

Snakin-1 (SN1) is a 63-residue member of the GASA/snakin superfamily proteins isolated from potato tubers. The chemical synthesis of snakin-1 enabled elucidation of the structure using racemic protein crystallography.3