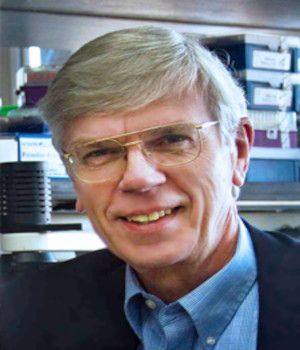 Biochemists understand that zinc-metalloproteins are involved in virtually every area of biochemistry. Moreover, transient changes in Zn also modulate gene expression and cell function. A fascinating example is the finding that many proteins involved in the transcription of DNA into RNA contain zinc. As a class, they are being call zinc-finger proteins. We are probing the reactivity of the metal binding sites of one of these DNA-binding proteins, called Sp1. Another Zn-Finger structure of great ineterest to us is the nucleocapsid GAG protein of the AIDS virus and its complex with viral RNA. Disruption of its Zn coordination site may reveal a new approach to AIDS therapy.

A unique structure that we study is metallothionein. It is, in effect, a giant metal chelating agent, that binds seven zinc ions in two metal clusters and which we believe is crucial to the uptake of zinc into tumor cells and its organized distribution into other zinc proteins. Chemical, cellular and molecular biological approaches are being used to explore these ideas. A particularly interesting observation is that under virtually all condition, some metal-free metallothionein exists in the cell. How does that happen, considering that metallothionein has a very large affinity for Zn? This question underscores that fact that relatively little is known about the reactions govern how extracellular Zn moves into cells and selectively binds to proteins or how intracellular Zn rearrangement occurs. Collectively, we call these processes Zn trafficking. We are studying trafficking using two complementary approaches—following the movement of stable isotopes of Zn through and among Zn proteins by inductively coupled plasma mass spectrometry and examining Zn localization and fluxes in cells by high magnification microscopy with the aid of Zn fluorescence probes. A key question that this two-pronged approach can address is, what molecular species are being imaged with fluorescence microscopy.

Interestingly, metallothionein is also central to the cellular metabolism of toxic, heavy metals such as cadmium, mercury, and perhaps chromate. It is also an important determinate of the activity of antitumor drugs that are alkylating agents or oxidants. Using cell populations in culture, such as kidney proximal tubule cell, and chemical techniques such as NMR spectroscopy with the spin 1/2 nucleus of cadmium, we are investigating the mechanism of toxicity of Cd2+ which is found in the environment and the workplace, and the possible role of metallothionein in cellular protection against carcinogenic chromate.

It is hypothesized that Zn-finger proteins may be highly reactive targets of many of the same chemicals that interact with metallothionein. To investigate this question, we are studying the reactivity of Sp1 with such agents as Cd, nitric oxide, and chromate and comparing these results with Sp1 activity in cells exposed to the same reagents. In so doing, we are able to obtain a robust understanding of the cellular mechanisms of action of toxic chemicals.