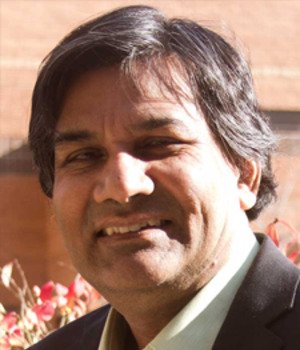 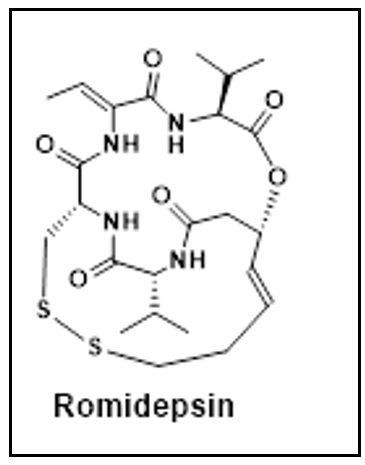 deacetylase inhibitors (HDACi), are promising therapeutics to treat memory loss associated with aging and neurodegenerative disease. However, use of existing HDACi for the treatment of central nervous system disorders is precluded by their weak blood-brain barrier permeability and undesirable toxicity. Here, we address these shortcomings by developing a new class of disulfide-based compounds that are inspired by the scaffold of the FDA-approved HDACi romidepsin (aka FK288, Istodax). Our findings indicate that our lead compound, MJM-1, increases overall level of histone 3 (H3) acetylation and displays cytotoxicity against a prostate cancer cell line. Utilizing the maximum tolerable dose determination assay, we observed that MJM-1 has a high tolerability profile in mice compared to romidepsin. Next, we found that when MJM-1 is administered intraperitoneally (i.p.), it rapidly crosses the blood-brain barrier (BBB) and travels to the hippocampus, a critical brain region responsible for memory formation. Consistent with this finding, we demonstrate that post-training i.p. administration of MJM-1 enhances hippocampal-dependent spatial, but not object recognition, memory consolidation in male mice. These findings collectively demonstrate that MJM-1 is a promising HDACi with low systemic toxicity and beneficial effects on memory formation. Thus, MJM-1 represents a potential lead for further optimization as a therapeutic strategy for ameliorating cognitive deficits in aging and neurodegenerative diseases. 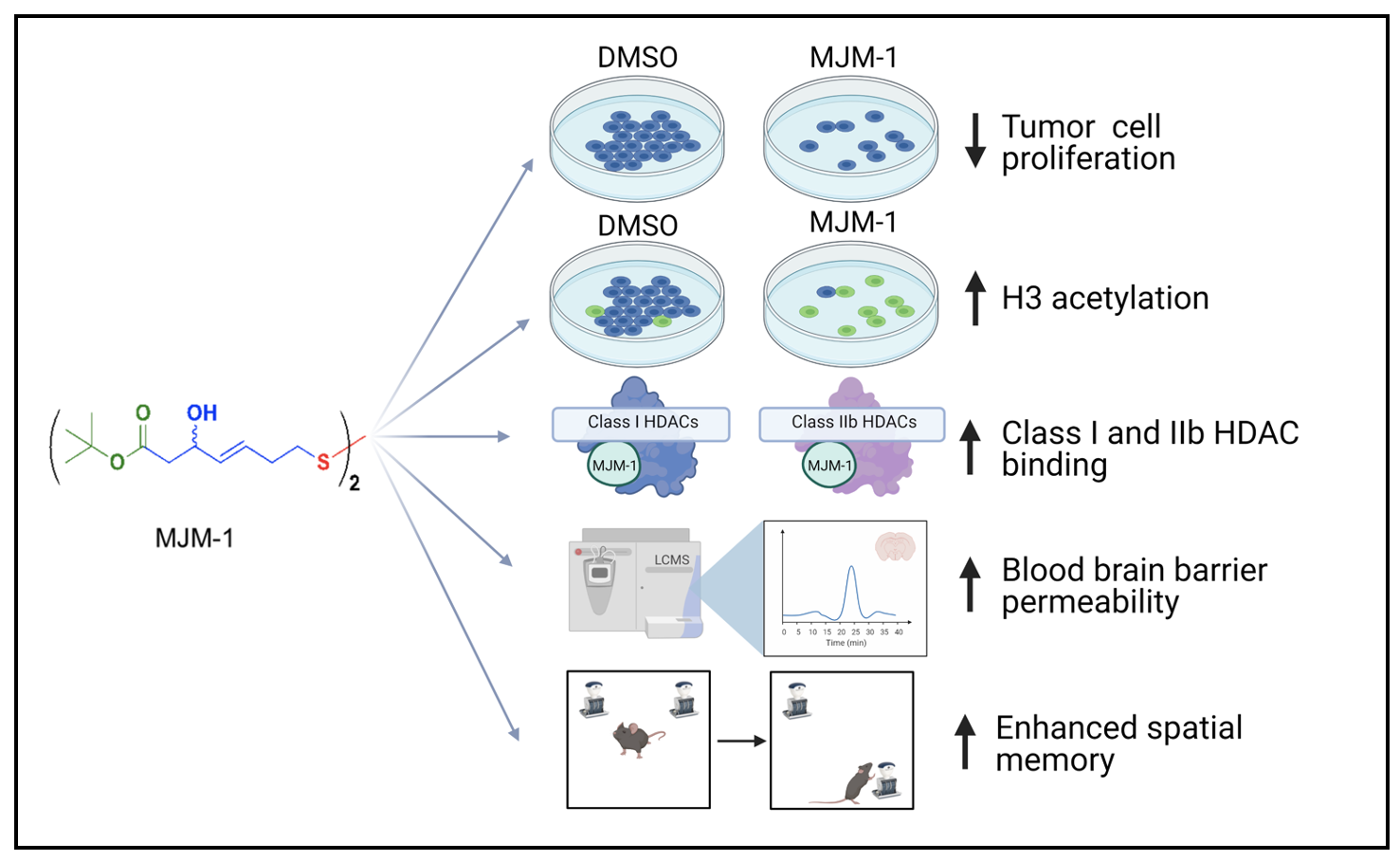 Microtubules are essential components of the cell cytoskeleton and play an important role in several cellular functions. Apart from many other critical functions, they are essential for the formation of the mitotic spindle, which provides the structural framework for the physical segregation of sister chromatids during cell 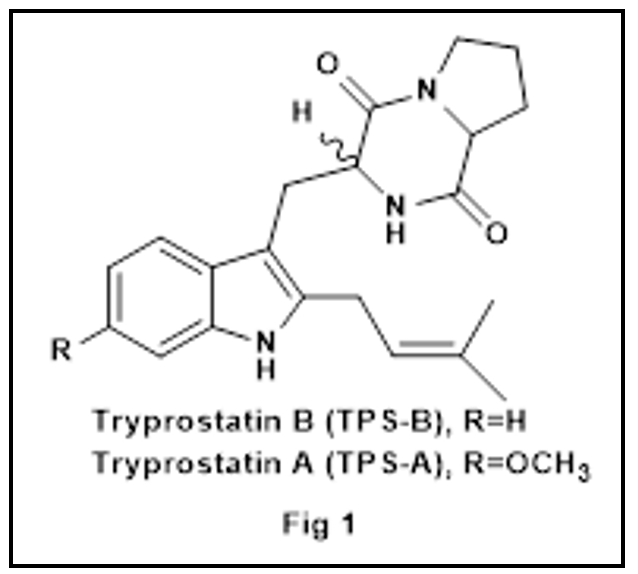 division. Microtubule-inhibiting agents, which are currently among the front-line approaches to cancer chemotherapy, include compounds that interfere with either the assembly or disassembly of microtubules, thereby suppressing microtubule dynamics required for proper mitotic spindle function in rapidly dividing cells. The result is apoptosis or programmed cell death. Because of their potent antitumor activity, drugs targeting microtubules are among the most commonly prescribed anticancer agent. There are several natural products that modulate microtubule polymerization such as vinblastine, vincristine, and paclitaxel. These have been widely recognized as active chemotherapeutic agents in the treatment of various cancers such as leukemia lung, breast, ovarian and esophageal cancer. To develop new microtubule inhibitors with high potency, low toxicity and good adoption, distribution, metabolism and elimination, we propose to synthesize specific analogs of TPS-A (Fig 1). TPS-A is a microtubule inhibitor having anti-phytopathogenic activity and inhibits cell cycle progression of tsFT210 cells in the G2/M phase at a concentration of 50 µg/mL. Thus, analogs of TPS-A hold great promise for the development of highly potent microtubule inhibitors. Several synthesis strategies have already been reported, but preclude the generation of a library of analogs due to lengthy and low yielding procedures. Our research objective is to generate analogs of TPS-A with significantly increased ability to reduce tumor growth. The hypothesis is that an analogue of TPS-A with an IC50 in the lower micromolar or higher nanomolar range would allow for meaningful results in subsequent in vivo studies. Our approach is to advance previous scientific efforts and use molecular docking to guide the design of new molecules. We developed a synthetic strategy that will enable us to quickly synthesize new TPS-A analogs.

In 2019, we developed a convenient method to synthesize TPS-B in only six steps with 45 % overall yield. Later, we modified this procedure to prepare TPS-B in four steps from gramine 1 (Scheme 1). In the final step, we obtained two diastereomers which were separated by column chromatography.

Considering the previous results and SAR studies of TPS-A and its derivatives by utilizing our method, we propose to synthesize analogs of TPS-A by varying R, R’, and R’’ substituents in individual sets (Sets 1,2 and 3, Fig 2). All compounds will be evaluated using in vitro studies described below. The two most favorable substitutions from each Set will be combined to establish compounds in Set 4 (Set 4, Fig 2). As indicated in the flow chart, the biological activity of Set 4 will be tested once these compounds are synthesized. The top hits from the final set will be investigated in vivo. 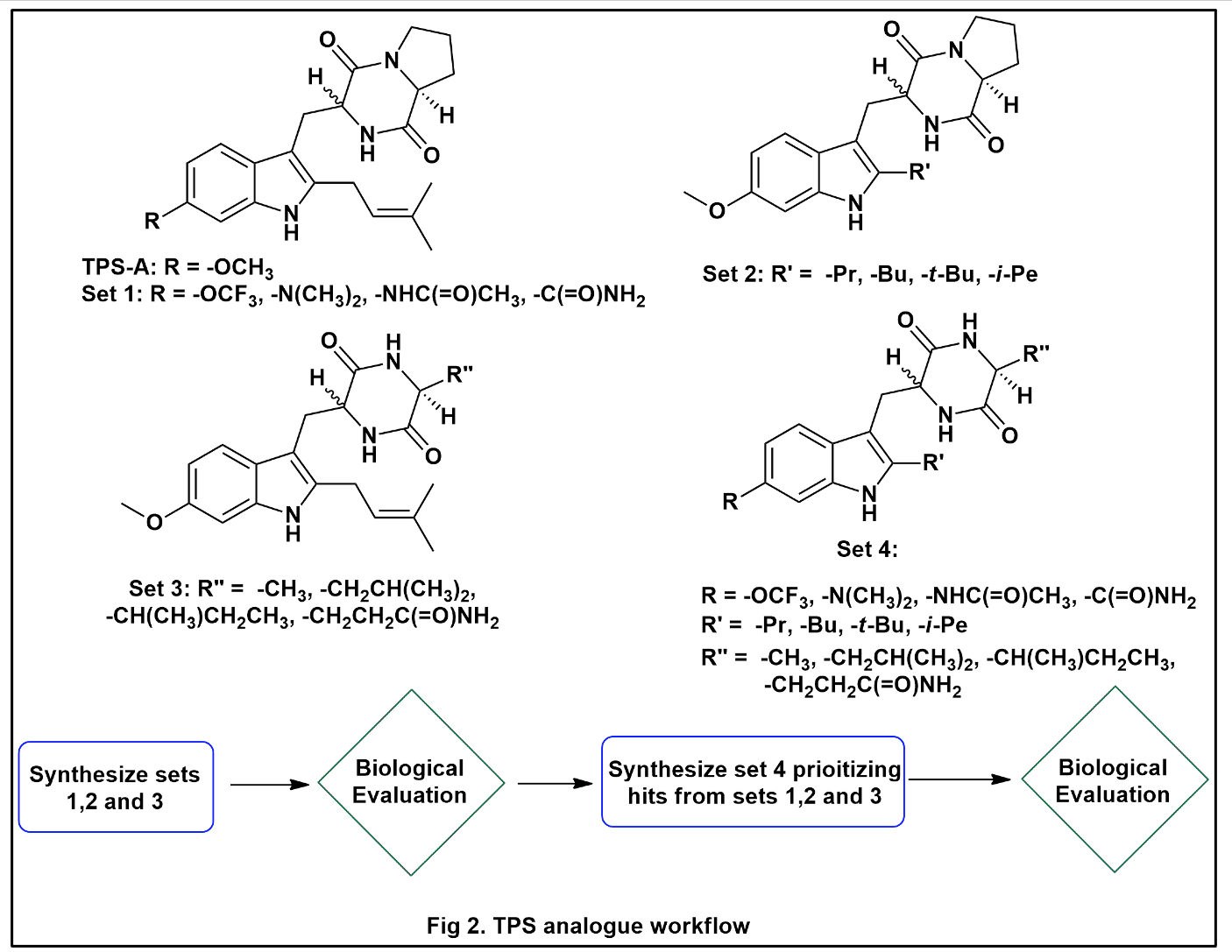