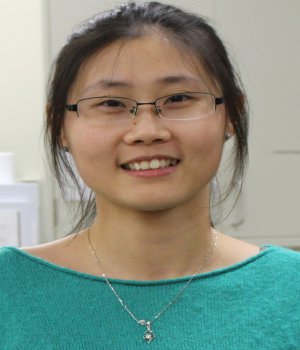 Why I chose the Chemistry and Biochemistry Program at UW-Milwaukee

I like crystallography, which is an important tool to determine protein structures. Dr. Silvaggi Lab is working on many proteins (like ADC family, RitR) and exploring the mechanisms based on their structure and enzyme kinetics. In this lab, I can learn how to crystallize proteins and determine their structures by X-ray diffraction

Favorite things to do in Milwaukee

Hiking and BBQ in beautiful parks.

My work spans two important areas of biochemistry: enzyme catalysis and regulation of gene expression by DNA-binding proteins. The first part of my work is a mechanistic enzymology project aimed at understanding the structure and mechanism of the novel pyridoxal-5’-phosphate (PLP)-dependent L-arginine hydroxylase/deaminase, MppP, fromStreptomyces wadayamensis (SwMppP). The enzyme SwMppP is a critical component of many antibiotics with potent activity against drug-resistant pathogens like MRSA. SwMppP is predicted to be a type I/II aminotransferase based on primary sequence identity. However, NMR and ESI-MS results showed that SwMppP is not an aminotransferase, but rather a hydroxylase. This is exciting because SwMppP is the first PLP-dependent enzyme to react with oxygen in any context other than oxidative decarboxylation.

The second part is focused on a new family of two-component response regulator proteins that lack the catalytic aspartate residue that mimics the phosphorylation mechanism of typical 2-component response regulators. These so-called aspartate-less receiver domain (ALR) proteins are not regulated by phosphorylation, but by other factors such as binding of a ligand. We are using biophysical tools to determine the regulatory mechanisms of proteins with redox-sensitive ALR domains. RitR from Streptococcus pneumonia R6, plays roles in regulating iron uptake, oxidative stress response, and pathogenicity in a mouse lung model. Our structure showed that N53 takes the place of the phosphorylatable aspartate residue of typical response regulators, and the Mg2+-binding site required for phosphorylation is disrupted in RitR. Thus, RitR is certainly not regulated by phosphorylation of the receiver domain, which means that RitR must necessarily have a different activation mechanism.