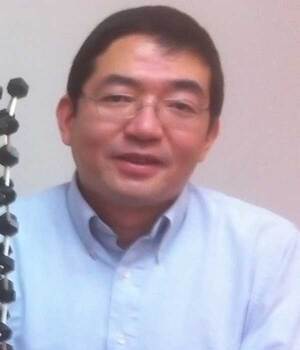 There has been an increasing interest in the field of bioinspired soft robotics recently. Unlike traditional rigid robots, soft robots can be used for carrying soft, fragile payloads without causing damage and working in cluttered and/or unstructured environments by employing large strain deformation. Liquid crystalline elastomers (LCEs) have fascinated scientists and engineers because they can translate small molecular movements triggered by an external stimulus into large mechanical motions. We have developed a general approach to wavelength-selective, IR light-driven LCE composite-based bilayer hinges that show fast, reversible bending with a large strain. Such composite bilayer hinges can be used in various remote-controlled soft robotic devices such as active origami structures that can reversibly fold and unfold, Venus flytrap-inspired grippers that can pick up delicate objects even under water, and inchworm walkers that can crawl up a hill at a 50-degree incline (See the video below).

Cephalopods, such as cuttlefish, demonstrate remarkable adaptability to the coloration and texture of their surroundings by modulating their skin color and surface morphology simultaneously, for the purpose of adaptive camouflage and signal communication. Inspired by this unique feature of cuttlefish skins, we have developed remote-controlled, smart films that undergo simultaneous changes of surface color and morphology upon IR actuation. We have also demonstrated a remote-controlled inchworm walker that can directly couple a color-changing skin with the robotic movements (See the figure below). 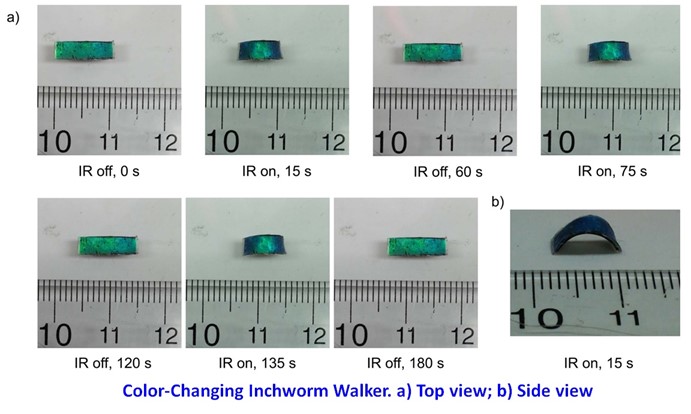 Shape engineering is crucial for controlling the properties and functions of polymers, such as surface roughness, adhesion and wettability, pore size and connection, chirality, and responsiveness towards environmental stimuli, which enable a broad range of applications. We have developed a strategy for shape-reprogramming in a single polymer material called Nafion, which not only allows shape-encoding and 3D translation of encoded geometric information, but also enables erasing and re-encoding of shape information via reversible localized chemical patterning on the same piece of polymer. In essence, our shape-reprogrammable polymer acts as computer hardware that can be reformatted and reprogrammed repeatedly (See the figure and video below). Such reprogrammable chemical 3D shaping technology allows Nafion films to be repurposed directly without going through material disposal and recycling. 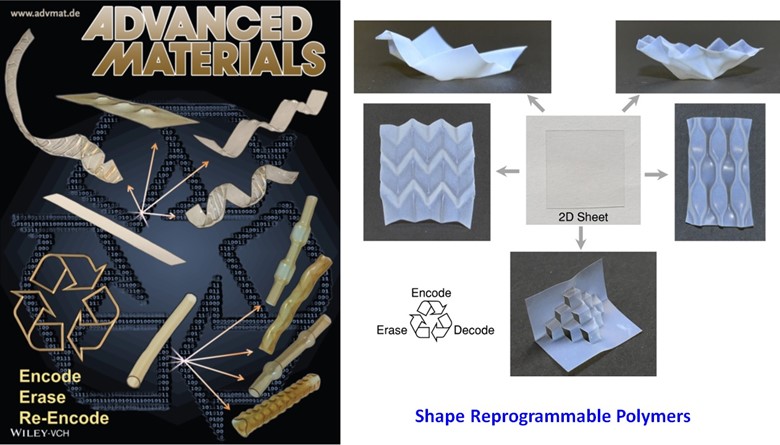 The bioinspired stimuli‐responsive structural coloration has received great interest from the scientific and engineering communities in the past two decades, and it offers a wide range of promising applications in medical diagnostics, advanced packaging, environmental and building monitoring, adaptive camouflage, intelligent coatings and textiles, and anticounterfeiting. Because of its design simplicity, thin film interference represents a promising solution toward scalable and affordable manufacturing of high‐quality responsive structural coloration systems. However, thin films of polymers with appropriate thickness generally do not exhibit visible structural colors if they are directly deposited on transparent substrates such as glass, or flexible and stretchable substrates such as polydimethylsiloxane. We have recently developed a versatile new strategy that enables scalable and affordable manufacturing of stimuli-responsive interference coloration (RIC) systems using any substrates. We have demonstrated real‐time, continuous, colorimetric RIC sensors for humidity, organic vapor, mechanical strains, temperature, and certain chemicals by using various stimuli‐responsive polymers (See figures below). The main advantages of such RIC sensors include low cost; zero power consumption; spatial and temporal resolution; and fast, dynamic, and reversible response. Since a vast number of stimuli-responsive polymers and composites are available with rich chemistry, it is possible to significantly expand the RIC systems with new properties and functions, which will open the door to many application possibilities. 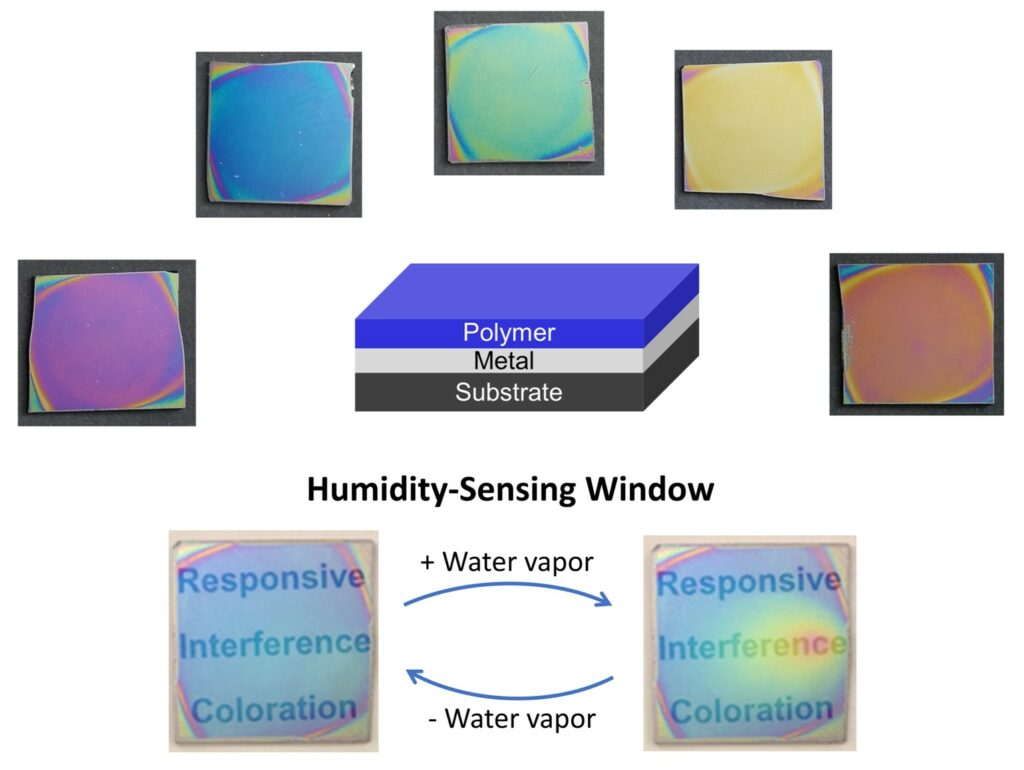 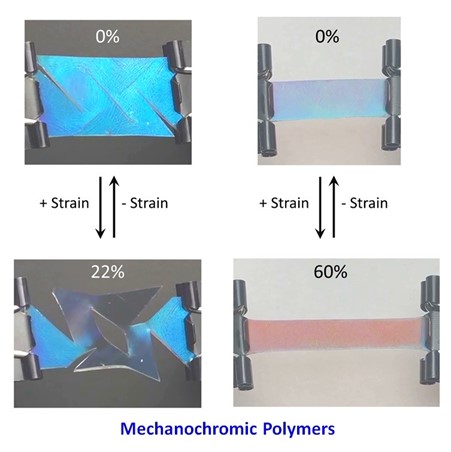 (selected from 61 publications with over 6500 citations; *as corresponding author)