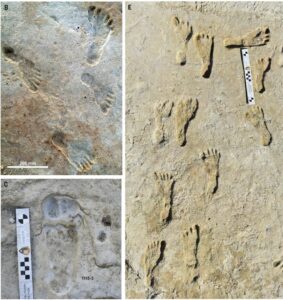 One of the most exciting archaeological finds of the decade is thanks in part to a UWM graduate. Clare Connelly, who graduated with a Master’s in Anthropology in 2015, has taken her archaeological and museological knowledge across the country. Her current project with the National Park Service has changed our understanding of humans in North America.

The discovery of 61 fossilized footprints at Tularosa Basin in the White Sands National Park in New Mexico points to human presence in North America 21,000 to 23,000 years ago, the same time as the Last Glacial Maximum (LGM). During this period of time, ice sheets spread as far south as modern-day New York City and global mean temperatures were 7-9 °F (4-5 °C) cooler than today. The new findings suggest that humans were in North America 7,000-9,500 years earlier than originally believed.

Alongside these human footprints are those of megafauna such as giant ground sloths and mammoths. Lake Otero rested within the Tularosa Basin during this period. The combination of a less arid climate and plentiful vegetation made the region ideal for both human and animal life. The availability of plants brought in the megafauna herbivores, which in turn invited carnivores such as the American lion and dire wolf.

On April 2nd, Connelly presented her paper “Working with Our Tribal Partners to Document Fossil Cultural Resources” at the SAA conference in Chicago. She has been cited as a co-author for the recently published Science article (https://www.science.org/doi/10.1126/science.abg7586) on the matter, quoted in an Archaeology article (https://www.archaeology.org/issues/445-2111/features/10051-new-mexico-ice-age-footprints) on tribal participation, and interviewed for Idaho Public Radio (https://www.kisu.org/podcast/the-nature-of-idaho/2021-10-29/white-sands-fossilized-footprints). Research is ongoing at the White Sands site.

Join us for this year’s GIS Days Programming!