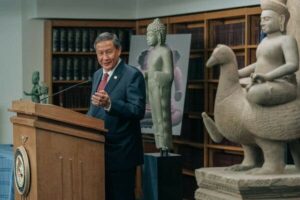 On August 8th, Assistant Secretary of State for Educational and Cultural Affairs Lee Satterfield met with Cambodia’s Ambassador to the United States Keo Chhea in New York for the repatriation of 30 objects of cultural and religious value. Other objects from Burma, Thailand, and India were also handed over for repatriation.

The New York attorney’s office, who took part in the hand off event, said the objects were stolen by an organized looting network and many of them were sold to museums and collectors through the antiques dealer Douglas Latchford. Latchford was charged in 2019 with wire fraud conspiracy and other crimes related to the years-long process of looting and sale of antiquities from Cambodia. Among the crimes, it is reported that he created false provenance documents to pass off the objects as legal and legitimate for international art market sales. Latchford’s indictment was dismissed following his death in 2020.

The organized looting network in Cambodia has been going on since at least the 1960s. During looting efforts, artifacts were stolen from archaeological sites such as Koh Ker, moved across the Cambodia-Thailand border, and given to brokers to be then handed to art dealers in Bangkok. Both local and international customers purchased the objects with falsified documents created by the art dealers.

The repatriated objects include sandstone and bronze sculptures from the Bronze Age to the 12th century. One of the repatriated objects, “Skanda on a Peacock,” was looted from a temple in Koh Ker in 1997. Another, a 10th century sculpture of the Hindu god Ganesha, sustained considerable damage since it was first photographed by French archaeologists in 1939.

Save the Dates: Department Colloquia are back!