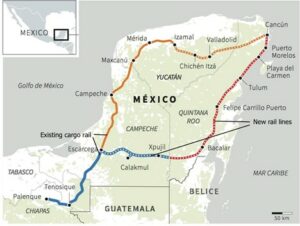 The Mexican government is currently working on creating an intercity train system that will connect tourist sites across the Yucatan Peninsula. However, the project has received backlash from environmental activists, archaeologists, and cultural resource management professionals alike.

Those in opposition worry about the environmental impact of the train, which is set to cut through the Mexican jungle and endanger jaguars and other wildlife in the area. Additionally, the track is set to be lain atop Mexico’s cenotes, underwater limestone caves that can take decades to explore fully.

Volunteer cave divers working to uncover the archaeological mysteries of these caves fear they will be lost forever if the train path does not change. In 2007, divers found the nearly complete skeleton of a woman who died 13,000 years ago along the Caribbean coast. The decision to keep the train tracks on their current path could potentially cut off discoveries of some of the oldest human remains in North America and keep archaeologists from discovering more about ancient life in the area. The government’s current plan is to plunge cement columns down into these cenotes to provide support for the railway’s weight, likely causing the caves to collapse or their entrances to be lost.

Archaeological sites on the surface, too, may be in danger if the train project is completed as originally planned. Archaeologists working on the surface will no longer have the space to properly conduct excavations without the disturbance of the train tracks and fear surface level relics will be disturbed, potentially even broken, or looted.