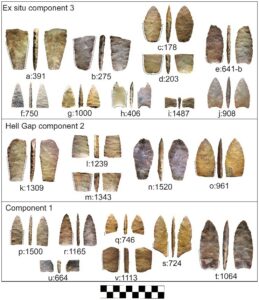 Recently published research has confirmed that a Paleoindian site in Wyoming is America’s oldest mine to date. These findings came from the excavation of a quarry trench in southern Wyoming between 2017 and 2020, lead by Wyoming State Archaeologist, Spencer Pelton. The Powars II site, where the excavation took place, currently serves as the only red ocher (hematite) quarry identified north of Mesoamerica in the North American archaeological record. Preserved bone found at the site has assisted in dating the site at an estimated 12,840 to 12,505 years old based on radiocarbon dating.

During the site’s recent excavation, 1,223 artifacts were uncovered. Projectile points at the site included those from Clovis, Plainview, and Hell Gap cultures. Mussel shell fragments found here may have been utilized to make beads. Faunal specimens showed evidence of use as digging implements.

Based on the evidence, researchers believe the site was used for at least 1,000 years. They believe the Clovis and Plainview cultures extracted red ocher using the modified faunal specimen digging tools and performed other tasks consistent with stone tool usage during this period. Later, the Hell Gap culture placed artifacts in piles within the quarry pit, potentially representing a currently unknown behavioral event at the site.

The use of red ocher throughout Paleoindian archaeological context was common. The mineral has been observed by archaeologists in Paleoindian burials, campsites, and hunting, among other contexts. Red ocher was also used as an early way to create art. The mineral could be ground into a powder and mixed with a liquid to create a paint or used like a crayon on surfaces. The use of this pigment dates to around 285,000 years ago, with oldest evidence found at a Kenyan Homo erectus site. It was also utilized by Neanderthals 250,000 years ago. Other uses of ochre include hide tanning, medicinal purposes, and as an adhesive.

Congrats to the Graduating Class of 2022!