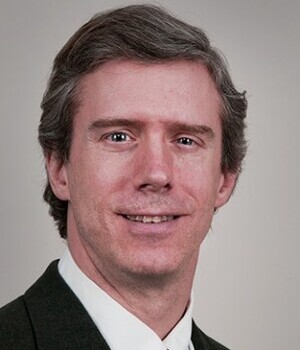 Physics, University of Illinois at Urbana-Champaign

Dr. Bob Olsson is a professor in the Physics and Chemistry Department at MSOE, where he has taught physics courses to students from all majors since 2001, as well as a course in lasers and applications.

We investigated the fabrication of an optical-fiber oxygen sensor based on luminescence quenching of a ruthenium (II) complex for our optical-fiber-sensor arrays. Sensor regions are located between two optical fibers forming orthogonal fiber-fiber junctions. Ruthenium molecules are embedded in a photo-polymerized hydrogel matrix, which is covalently attached to the surface-modified fiber-core. For the optical evaluation of these sensors, the fiber sensor junctions are placed in a flow cell. When gaseous oxygen diffuses into the hydrogel, it quenches the luminescence, with the degree of quenching correlating with oxygen partial pressure; this behavior was indeed observed in the crossed-fiber configuration with a sensor response time of 1 s. To account for intensity fluctuations, an oxygen-insensitive dye in an adjacent fiber-fiber junction was used for intensity referencing, which markedly improved the response curves. The oxygen sensor was also corrected for the temperature-dependence of the ruthenium complex using the dye Kiton Red.

Our recently developed method for combinatorial synthesis leads efficiently to linear arrays, where the location of a compound in the array encodes its complete synthetic history. Such arrays prepared using an optical fiber as a linear support can be probed with a fiber-guided pulse, allowing evanescent interaction with fluorescent probe molecules at the core-cladding interface. Optical time-of-flight distinction among output signals of fluorescent regions distributed along the fiber is carried out, allowing for the measurement of the location of the emitting fluorescent probes. A unique two-fiber, double-evanescent process overcomes limitations in spatial discrimination, due to fluorescence decay times in comparison to the speed of light. Investigation of an array of 102 fluorescent regions is described, with discussion of its features and limitations.

Columnar defects induced by high-energy heavy ion irradiation constitute one of the most effective vortex pinning sites in high temperature superconductors. We demonstrate a novel method of effectively patterning vortex pinning sites in single crystals of the high temperature superconductors YBa2Cu3O7−d and Bi2Sr2CaCu2Ox using heavy ion irradiation. These patterns include linear channels, a lattice of squares, and asymmetric pinning gradient sites where vortices can either flow unimpeded or are trapped in spatially periodic arrangements.

We demonstrate the Bose glass scaling behavior in a single crystal of YBa2Cu3O7−δ (YBCO) free from twin boundary pinning. We determine the scaling exponents from voltage-current measurements near the transition temperature and infer a lock-in transition from measurements of the angular dependence of the resistivity. In addition we demonstrate that the kink in the Bose glass irreversibility line in irradiated untwinned YBCO occurs systematically at the dose matching field.

We report on the transport, magnetization, and scanning tunneling spectroscopy measurements on c-axis oriented thin films of MgB2 irradiated with high energy heavy ions of uranium and gold. We find a slight shift in the irreversibility and upper critical field lines to higher temperatures after irradiation. In addition, we observe an increase in the critical current at high temperatures near Tc2 and only a small change at low temperatures. Furthermore, we find no evidence for the existence of anisotropic pinning induced by heavy ion irradiation in this material. Tunneling spectra in an irradiated sample show a double gap structure with a flat background and very low zero-bias conductance, behaving in much the same way as the pristine unirradiated sample.