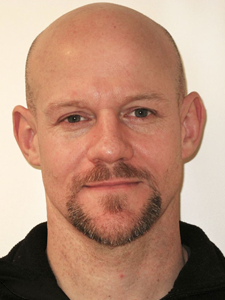 My groups research interests are primarily concerned with the enzymatic activation of molecular oxygen. Molecular oxygen sits high atop the biological redox scale and so provides a massive driving force for many transformations.

In recent years, the events leading to the activation of molecular oxygen by enzymes have become clearer. However, many of the subsequent catalytic events in which highly reactive oxo-intermediates are directed to react along a single coordinate to give a specific product remain to be elucidated.

Enzymes that react with molecular oxygen need some mediator to carry out the reduction/activation step. These mediators are either an organic prosthetic group capable of one electron chemistry, or a metal ion such as Fe(II), Fe(III), Mn(II) or Cu(II). We are currently concerned with the structure and catalysis of four enzymes that ultilize dioxygen as a substrate. Two of these use Fe(II) as a mediator and two use flavin adenine dinucleotide.

An enzyme in the pathway for the catabolism of tyrosine, 4-hydroxyphenylpyruvate dioxygenase (HPPD) catalyze the incorporation of both atoms of molecular oxygen into an aromatic substrate bringing about a substantial rearrangement. The range of reactions include decarboxylation, hydroxylation, and substituent migration, all in a single catalytic cycle.

The reaction catalyzed by HPPD is intriguing due to the considerable alteration that occurs in the conversion of its substrate, hydroxyphenylpyruvate (HPP) to its product HG. However, HPPD has particularly interesting associated chemistry. Inhibition of the enzyme in man alleviates the symptoms of three metabolic defects diseases, while its inhibition in plants halts the production of plastoquinone and tocopherol and thus uncouples photosynthesis and kills the plant and this is the basis for numerous commercially available herbicides.

Hydroxymandelate synthase (HMS) is a mechanistic homolog of HPPD involved in the production of (hydroxyl) phenylglycine which is key component of non-protein peptide antibiotics such as vancomycin and chloroemycin. The differences in HPPD and HMS may reveal how reactive oxo-intermediates can be directed along specific paths.

Kynurenine-3-monooxygenase (KMO) is a flavoprotein hydroxylase that controls the levels of quinolinic acid, 3-hydroxykynurenine, xanthurenic acid and kynureninic acid. All of these molecules play key roles in the outcome of ischemic trauma in the brain. Our objective is to learn enough about the KMO reaction mechanism such that specific inhibitors can be devised that will allow modulation of the levels of these metabolite molecules for the treatment of stroke, epilepsy, and Huntington’s disease.

Recently, we have initiated the study of renalase. Renalase is a human flavoprotein originally claimed to catabolize catecholamines to lower blood pressure and slow heart rate. We have shown that this is not what the function of renalase and that it is completely inactive with catecholamine substrates. Renalase instead oxidises 2- and 6-dihydroNAD(P), both of which are isomers of NAD(P)H. These forms of NAD(P)H arise from non-enzymatic reduction of NAD(P)+ that yields three reduced forms of the nicotinamide ring. In addition to the 4-dihydroNAD(P) (aka NAD(P)H) the 2- and 6-dihydro forms are also made. These alternate reduction products are potent inhibitors of primary metabolism dehydrogenase enzymes. It therefore appears that the function of renalase is to alleviate this threat to primary metabolism by oxidizing these molecules to NAD(P)+.

The methods we employ tend to be based in kinetics. Our approaches generally measure individual rate constants for specific reaction steps. Presteady-state analysis using specialized rapid reaction techniques such as stopped-flow and rapid quench is used to elucidate the chemical steps involved in catalysis or inhibition. These investigations are augmented by a series of steady-state methods and a variety of static spectroscopic measurements.