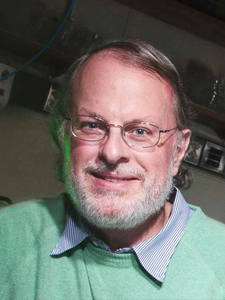 Intermolecular Interactions in Solids at a Microscopic Level

The research interests of my group fall into two main areas:

To study molecular interactions at such a level of detail, we are employing state-of-the-art laser spectroscopic methods (such as hole-burning spectroscopy) to probe transitions between electronic states of probe molecules in host materials of interest (e.g. proteins, molecular crystals) and to determine how the transitions are affected by the interaction with their environment. In particular, we are interested in determining quantitatively the electric fields that are generated at the site of the probe molecules by the charge distributions of the surrounding host molecules. Knowledge of these fields is of major importance particularly in biological systems, where internal fields can be key determinants in processes involving charge separation and transport (e.g. photosynthetic reaction center) and can also determine ligand discrimination (e.g. myoglobin, hemoglobin). Related work is performed within UW-Milwaukee's interdisciplinary research center, the Laboratory for Surface Studies.

The second focus area of our research is based on our "Fiber-Optic Combinatorial Chemistry" technique, which combines combinatorial synthesis and optical fiber sensor technologies. This work is done in close collaboration with the group of my colleague, Prof. Alan W. Schwabacher, who introduced a novel combinatorial chemistry method that relies on linear supports. With this one-dimensional combinatorial chemistry method, we are in a position to synthesize libraries of compounds with thousands of members in the cladding of optical fibers. When these compound libraries are assayed for a desired property using the binding of fluorescent tags as markers for positively identified library members, in effect, a fluorescent fiber sensor array is created. Laser pulses propagating down the fiber core probe the cladding for the presence of fluorescent groups. After excitation, the subsequent fluorescence pulse is propagates back to the front end of the fiber, where it is detected. From the time delay between exciting and returning pulse, the location of the emitting molecule is calculated. It is a virtue of our combinatorial synthetic procedure that with the location of a compound on the fiber, its synthetic history is immediately known. With our technique, compound libraries on optical fibers can be synthesized for many different purposes, ranging from the design of new drugs to the fabrication of linear optical fiber sensor arrays for a multitude of sensing tasks, from the screening of medical analytes to the monitoring of pollutants in the environment.

In order to resolve the fluorescence pulses from adjacent fluorescent regions on a fiber, a minimum separation has to be maintained. The spatial resolution can be improved dramatically through the use of a second fiber, which couples to the first one only through the evanescent fields of the light modes, as an optical delay. We are continuing to study the properties of this coupling scheme and to determine the optimum parameters for the various possible applications our "Fiber-Optic Combinatorial Chemistry" method.

Within the Center for Water Security, which was established with support of the United States Congress at UW-Milwaukee, we are developing a fiber-optic monitoring system for municipal potable water distribution systems. The goal is use our "Fiber-Optic Combinatorial Chemistry" method to created optical fibers that monitor potable water during its distribution for the presence of harmful agents. Since the readout is spatially resolved, the location of harmful substance is immediately known, allowing for rapid and targeted countermeasures. These research projects integrate challenging experimental and theoretical work. Students gain broad experience in a variety of fields such as optical (laser) spectroscopy, laser physics, cryo and vacuum technology, as well as molecular modeling.