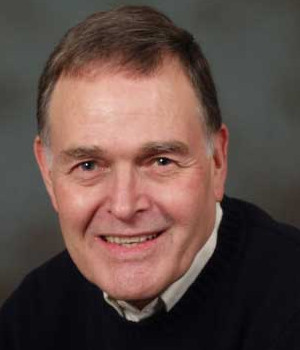 Professor Bennett's research efforts are centered around molecular structure and bonding studies in inorganic systems with emphasis on the effects of charge density variations on molecular behavior. Modern synthetic, crystallographic, spectroscopic, electrochemical, and theoretical methods are utilized to elucidate structure-function relationships in a wide variety of systems.

The fundamental goal of this research project is to test the hypothesis that single molecules are capable of conducting charge and/or transferring information via charge polarization over relatively long distances. The emphasis of the work is on "nanoscience" as opposed to "nanotechnology." Thus, the approach is systematic, beginning with the study of oligomers which are postulated to be the best candidates for such a study: [(CNArNC)W(diphos)2(CNArNC)]n, Ar=C6RaRbRcRd. 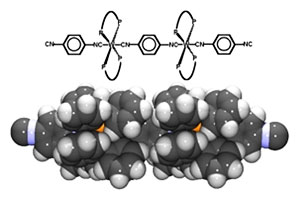 These molecules contain electron-rich metal centers bridged with aromatic ligands, creating a π network along the entire oligomer chain. Furthermore, they are surrounded with insulating organophosphine ligands which protect them from ambient oxygen and intramolecular charge transfer. The choice of these molecules is based upon extensive preliminary studies, which include the development of synthetic methodology, the elucidation of reaction mechanisms for oligomer formation, and the establishment of spectroscopic baselines for the study of more complex molecules. The second stage of the research effort is the creation of oligomers coordinated to suitable electrodes, and studies of the effects of electrode potential changes on spectroscopic probes in these molecules. This aspect of the research is critical to a complete understanding of the electronic nature of these putative molecular conductors. Preliminary results reveal that isocyanide ligands chemisorb to metals such as palladium with σ/π C-N bonds orthogonal to the surface, and that they are capable of forming complexes which will lead to the creation of the oligomers that are central to this research. Finally, the oligomers will be used to bridge the gap between two macroscopic electrodes, a critical step in the eventual creation of nanoelectronic devices. These electrodes (one an AFM tip) will then be separated, creating stepwise decreases in conductivity which will be utilized to determine the conductivity of single molecules. These experiments, coupled with the ability to create oligomers with specific numbers of subunits will allow for the determination of conductivity as a function of oligomer length, critical to determining the nature of the conductivity.

The separation of steric and electron effects is a major issue in the study of catalytic phenomena. The charge density at the catalytic center is a critical determinantinto whether or not a given site will be catalytically active or not, since the site must be able to coordinate the substrate, yet release products. In order to study these effects it is necessary to modify the charge at the metal center systematically – this is routinely done by changing ligands. Unfortunately, this also changes the geometry around the active site, and it is virtually impossible to separate geometric effects from changes in electron density. In this research we circumvent the need to change ligands by tethering the catalyst to an electrode surface with an isocyanide-metal bond. The π system allows for the direct modification of charge density at the active site without the need to change ligands. The figure below illustrates three types of catalytic processes currently under investigation, from left to right, olefin metathesis, polymerization catalysis, and nitrogen fixation.

The Chemistry of Sulfoxy Anions

Despite their ubiquitous nature, the complex chemistry of sulfoxy anions is poorly understood. This has been due to the lack of quantitative tools to investigate the composition and dynamics of solutions of these anions. Dr. Bennett's group has developed a new analytical method for the simultaneous multicomponent analysis of anions such as: S2O42-, S2O52-, S2O62-, S3O62-, S2O32-, HSO3-, SO32-, SO42-, and numerous others using ATR-IR spectroscopy. 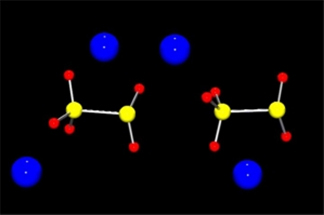 This method is currently being used in multicomponent kinetics studies of systems of these anions which have eluded explanation for nearly a century. These reactions usually follow multiple pathways; not only are they extraordinarily interesting in and of themselves, but are important in industrial and environmental chemistry as well. Recent crystallographic studies have revealed a complex and unexpected crystal structure for the simple ionic compound: Na2S2O5.