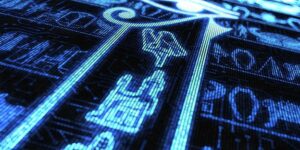 What happens to archaeological data after the creator has used it? Often, it never resurfaces for use by new creators. Sometimes, this is because the process of data collection is considered more important or because it is easier to collect unique data rather than reuse another collector’s data. Recently, a move toward teaching archaeology students digital literacy and the value of open access data has been undertaken.

Kevin Garstki, UWM alumni, and his colleagues have attempted to fill this gap. Garstki developed the course Digital Archaeology and Data Reuse, first taught in Spring 2020, for a blended undergraduate/graduate class. His course addressed the issues of reuse of archaeological data, how to utilize archived data, the chaotic and disorderly teaching of emerging technologies, and other problems for today’s academic archaeologists. Believing more is better, Garstki chose to provide a less in-depth discussion of a wider range of topics to allow students a broader knowledge, citing that many students probably would not be able to take a class like this later in their academic careers. In an increasingly computerized world, Garstki hoped to provide his students with information on coding and how best utilize it for archaeological study. Course units covered topics of introductions to the various platforms, data management, retrieving data, data analysis/reanalysis, and spatial data and web-mapping.

Overall, the course was well received. Garstki found that students were most interested in ways to visually display datasets that were fresh and exciting. The course, he hopes, will be a prototype for other digital archaeology classes, showing the ways in which new technologies can be incorporated into existing curriculum.

For now, it does not appear as though the class will be returning to the UWM course offerings, but those interested can read Garstki’s article here: Garstki 2022_Teaching-for-Data-Reuse-and-Working-Toward-Digital-Literacy-in-Archaeology