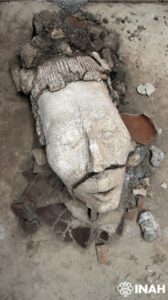 On May 31st, 2022, Mexico’s National Institute of Anthropology and History released a statement discussing the recent discovery of a Maya Maize God bust discovered at the Palenque archaeological site in the southernmost Mexican state of Chiapas. Archaeologist Arnoldo González Cruz and conservator Haydeé Orea Magaña found the head while removing loose dirt in El Palacio. Cruz believes the sculpture may have rested on a tripod set inside a reflecting pool made of stucco. Other finds at this ancient reflecting pond include animal bones, shells, obsidian, beads, and figurines. Here, Cruz believes, some sort of ritual took place before the pool was covered with dirt and enclosed.

The Mayan Maize God, Hun Hunahpu, was one of several within the Mayan pantheon and was one of the most important Mesoamerican deities. He was associated with not just the growing season, but also the cycle of rebirth and seasons.

Here are some other links with more information about the recent find at Palenque.