Individuals with administrative access to PAWS can access PERC rosters for their departments. It is recommended that there is one point person in a department that controls the activity on the PERC pages, with a backup person in case of a vacation or an emergency.

PERC rosters appear in PAWS as soon as prerequisites are enforced on a class section. When registration begins, students will begin to populate the roster.

Students on the PERC roster during registration will fall into one of the two following classifications:

(Example: Rita Paws is enrolled in BIO SCI 150 during the Spring 2015 term and wishes to enroll in BIO SCI 152 for the Fall 2015 term. The prereq for BIO SCI 152 requires successful completion of BIO SCI 150 with a grade of C or greater. Because Rita is currently enrolled in 150, she is able to conditionally enroll in 152. Once a grade is earned in 150, the Bio Sci department will review her grade to determine if she can stay registered or should be administratively dropped from the course.

Satisfied
Students that have taken a prerequisite course in a previous term (i.e., Rita took a course in Fall 2014 and is registering for the next course in sequence for the Fall 2015 term) and earned a satisfactory grade. Students that have satisfied the prereq will be filtered out of the main list by default. See the PERC Roster Key below for instructions on how to utilize filters.

*Students that have already taken a prereq course and received an unsatisfactory grade will not be permitted to register.

After final grades are posted for a term, the PERC roster should be reviewed. Any student that did not earn a high enough grade to move on will show on the roster as “Not Satisfied” so that the department can drop them by setting the Drop Indicator right on the PERC roster.

Each weeknight, a process runs to check for drop indicators (which would be set by department administrators earlier in the day). If a drop indicator is set for a student or group of students, they will be removed from the course and will receive an auto-generated email letting them know which class they were dropped from and why.

PERC Roster Key
The filters in the top box drive what you see on the roster below. The roster automatically filters to show only enrolled students who have not satisfied or only conditionally satisfied the enrollment requirement. If you do not change any of the filters, you will not see all the students enrolled in the section, just those that do not yet meet the requirement.

To display additional or different students, or to filter out a certain group, check or uncheck the boxes in the “Set Filter Options” box and click the green ‘Filter’ button. 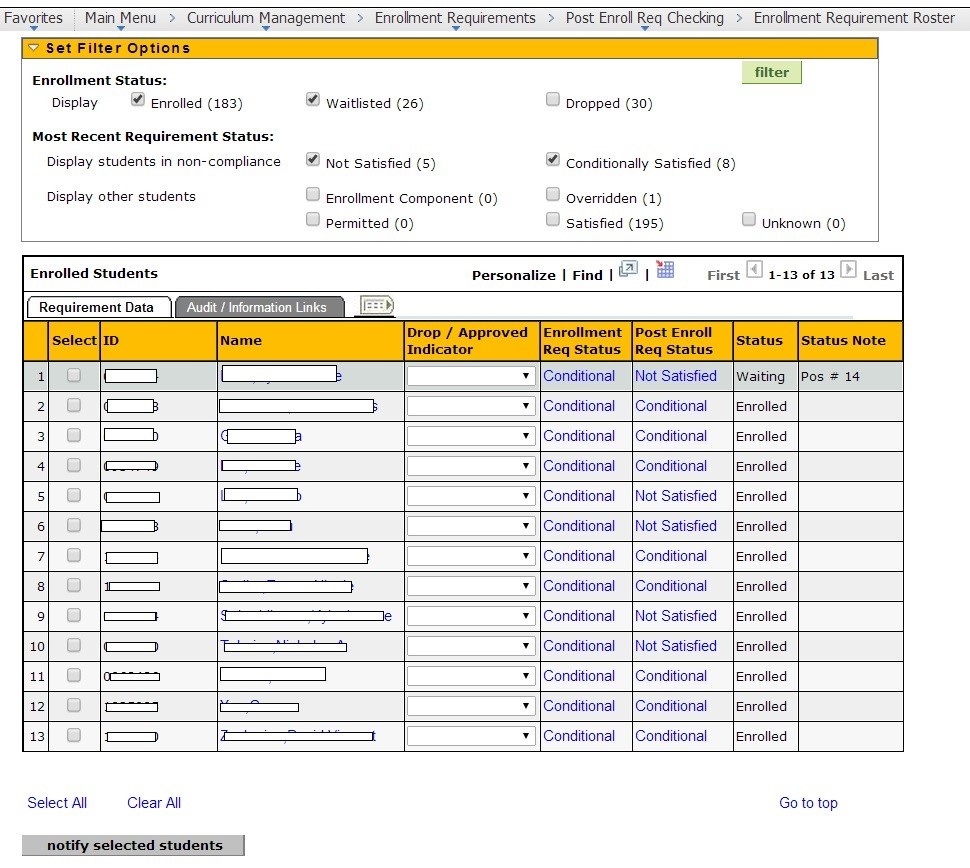 The Enrollment Req Status column indicates how the student initially enrolled in the class section. Once their grade in the prerequisite course posts (after the final grade post), the values in the Post Enroll Req Status column change to reflect current student eligibility.

Students Who Do NOT Meet the Prerequisite(s)
Students enrolled on the PERC Roster who do not meet the prereq after grades are posted will show as “Not Satisfied” in the Post Enroll Req Status column:

Clicking on the “Not Satisfied” link allows you to view detailed information about which part of the prerequisites the student failed to meet.

In the example above, the student did not earn the minimum passing grade for Bio Sci 150, the prerequisite course for the course in question.

Once you determine that the student has not satisfied the prerequisite for the class, you can set the Drop/Approved Indicator to “Drop Request.” As soon as the grade post process starts to run for a given term, an overnight process that drops students for whom the PERC roster indicator has been changed to “Drop Request” also begins. This process runs until the term starts. When they are dropped through this process, an  automatic email is sent to students notifying them that they have been dropped from the class because they did not satisfy the prerequisites for the course.

**In some cases, a student may appeal to the instructor and be allowed to re-enroll. It is important that the instructor communicates that information to the administrator in charge of the PERC process in your department. Once the student has re-enrolled, you will have to go into the PERC Roster and change the drop indicator to “Approved.” If the indicator is not changed, the student will be dropped from the course that evening.

Students Who MEET the Prerequisite(s)
Students who satisfy the prerequisite will be moved off the conditional roster via an automatic process when their satisfactory grade posts. To view those students, choose “Satisfied” from the Filter Options box at the top of the roster, and uncheck all other boxes except for “Enrolled” at the very top left. Then, click the green ‘filter’ button at the top of the page:

You will notice that both students that were conditionally enrolled and received passing grades as well as students that met the prerequisite upon registration will appear on this list.

Each department utilizing PERC should determine their own dates and deadlines for administrative drops. The Registrar’s Office recommends the following in order to ensure that students are dropped in a timely manner so that they are able to make alternate plans for their schedule before the term begins, or as close to term start as possible:

PERC FAQs
What does it mean when a student is conditionally enrolled and their grade is listed as 'IP'?

IP (In Progress) indicates that a grade has not yet been earned in a prerequisite course, or that a transfer credit grade has not yet been entered into PAWS. Transfer credit entry has a relatively quick turnaround, but if you notice a student has been sitting on the PERC roster with a conditional status for quite a while, see the troubleshooting section for steps to take to rectify the situation.

When will grades appear on PERC rosters?

How would a student that was dropped by PERC re-enroll when they obtain permission to take the course with permission from the instructor?

In some cases, a student may appeal to the instructor and be allowed to re-enroll. It is important that the instructor communicates that information to the administrator in charge of the PERC process in your department. Once the student has re-enrolled in PAWS, you will have to go into the PERC Roster and change the drop indicator to “Approved.” If the indicator is not changed, the student will be dropped from the course that evening. The cycle would continue (student registers, is dropped) until the Approve/Drop Indicator is changed.

What happened when a student that was previously on the PERC roster as conditional disappears?

They either dropped the course, or received a satisfactory grade and was moved to the “Satisfied” list, which is filtered out on the PERC roster.

When a student attempts to enroll after grades are posted, will they be placed on the PERC roster?

No. They will either be allowed to enroll (if they got a passing grade), or PAWS will prevent their enrollment (if they did not receive a satisfactory grade).

Other questions?
Contact Us! Choose Schedule of Classes from the drop down menu to ensure that your question is routed to the appropriate staff member.