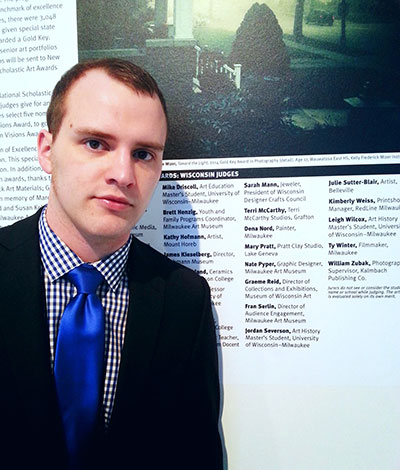 Leigh Wilcox, a third year graduate student and teaching assistant, and Jordan Severson, a third year graduate student and Advanced Opportunity Program Fellow, served as Wisconsin judges for the Annual Scholastic Art Awards Day in the Milwaukee area. The judges met in January for the adjudication process with a record number of student entries. Along with others, Wilcox and Severson selected student works for Honorable Mentions, Silver Key, and Gold Key awards for the region. They judged the works on their artistic merit without knowledge of the school or student who submitted each piece. They worked in panels of three for sixteen media categories divided by age group. The Gold Key winners later advanced to the National level in New York City. Both the Silver and Gold level works are displayed in the Milwaukee Art Museum until March 22, 2015. On February 14, the students received their Awards at the same location. The Scholastic Art Awards program was founded in the early 1920s and has been expanding since then to include more awards and more categories. There are currently seventy-six regional locations making up the national network for the program.

IN THE PICTURE
Jordan Severson