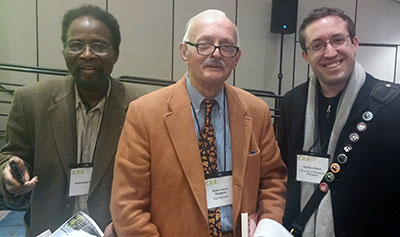 On February 14, Matthew Francis Rarey presented his paper, “Bolsas de Mandinga and the Art of Survival in the African-Portuguese World” as part of the special panel “The Talisman: A Critical Genealogy,” organized by Yael Rice of Amherst College and Benjamin Anderson of Cornell University, at the 103rd Conference of the College Art Association in New York. The paper forms the basis of Rarey’s in-progress book project that examines the role of small protective pouches produced and used by enslaved Africans in the cross-cultural interactions of the Black Atlantic world. While at CAA, Rarey also attended a special session honoring Robert Farris Thompson of Yale University, a celebrated art historian of Africa and the African Diaspora; and afterward snapped a photo with Thompson and Babatunde Lawal of Virginia Commonwealth University.