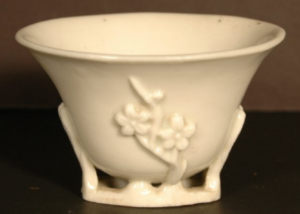 In a scene from one of my favorite movies, Indiana Jones and the Last Crusade, the titular hero attempts to rescue his father from the clutches of the Nazis. Mistaking his son for one of his abductors, the elder Dr. Jones bashes Indy over the head. His weapon of choice? A replica fourteenth-century Ming dynasty vase, decorated with cobalt blue floral designs painted on a stark white background.

Since first seeing the movie several years ago, I have continued to associate the Ming dynasty (1368-1644) with the vase wielded by Henry Jones, Sr. And indeed, such blue-and-white wares constitute precisely the type of porcelain for which the Ming dynasty is famous throughout the world. But it was by no means the only porcelain style produced in China during this period. Red-and-white wares, as well as polychromatic wares that incorporated up to five different colors, were also made, as were wares that were completely white. An example of this latter type, designated by the French as blanc de chine (“white from China”), can be found in the UWM Art Collection.

Manufactured in Dehua in China’s Fujian Province, blanc de chine porcelain first appeared in the mid-Ming dynasty and reached its height in the seventeenth century, during the late Ming and early part of the subsequent Qing dynasty (1644-1911). Ranging in hues from milky white to ivory to white tinged with pink, blanc de chine porcelain was used for a myriad of different objects: religious figurines; incense holders; calligraphy tools, including brush pots and water droppers; and vessels for eating and drinking. Decoration, often sparse on blanc de chine vessels, consisted of designs rendered in relief.

The blanc de chine object in the UWM collection is a cup, with a flared mouth, tapered bottom, and base with vertical extensions affixed to either side. A single motif – a pair of plum flowers blooming from a branch – adorns both the front and back of the cup. What I find most striking about this piece – and about the blanc de chine style in general – is its sheer simplicity.

Other types of Ming dynasty wares are often covered in decoration – floral designs, human and animal scenes, geometric patterns – from top to bottom, as illustrated in this bottle and this water vessel in the British Museum. Such overall busyness stands in stark contrast to this blanc de chine cup, which instead exudes a sense of calm, quiet, and peace. In my opinion, this quality makes the blanc de chine porcelains extremely appealing and certainly worthy of the same renown as their more famous blue-and-white counterparts.

Abraham & Isaac: Explore a Piece from the UWM Art Collection