Abraham & Isaac: Explore a Piece from the UWM Art Collection 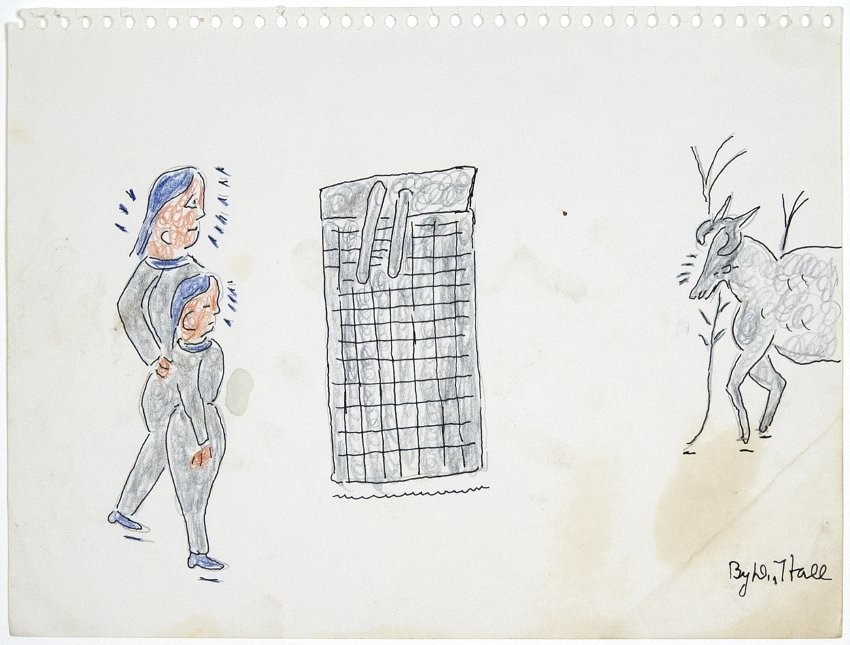 Dilmus Hall was an American self-taught artist from Georgia who made sculptures and 2D works throughout his life. In his later years, he made colored pencil-on-paper drawings including this drawing titled Abraham & Isaac. Much of his work revolved around biblical imagery as he was a deeply devout Christian. He also incorporated symbols and practices related to African American conjuring culture, imbuing his work with protective and charged charms. This can best be seen in his sculptures, especially those he made to adorn his home and yard. One of his most well-known yard sculptures is The Devil and the Drunk Man, which depicts a couple of passed out drunkards at a concrete table being leered at by the Devil himself. Hall believed in the evil ways of the Devil working in everyday life, and this sculpture served as a protective charm object. He asserted that all his ideas came from God and held faith in the artistic abilities and concepts that God had bestowed upon him.

The well-known story Hall seems to be depicting in Abraham and Isaac is the Binding of Isaac from the Book of Genesis. This biblical story revolves around Abraham being commanded by God in a vision to sacrifice his son, Isaac, on the mount of the Lord in Moriah. He is halted from this plan by an angelic messenger of God who reveals it was a test of faith, so Abraham saves his son and kills a nearby ram in sacrifice instead. In this drawing we can see an abstracted depiction of this story. There are the two figures of Abraham and Isaac, Abraham being the taller one, a large, gray rectangle that is likely the altar, and the ram to the far right, partially cut off the page. Isaac’s face is nondescript, but Abraham has a concerned look, and Hall has added small blue hash marks surrounding their faces, which act as markers of their apparently anxious emotional states. It is interesting to note the lack of spacial designations, with no clear horizon or ground lines and no contextualized background. The cropping of the ram adds to this lack of context and creates a sense of space moving in all directions, allowing the story to transcend the confines of the paper frame.

It is interesting that Hall chose to depict the moment before Isaac is on the altar and the moment after the angel intercedes and Abraham notices the ram as occurring all at once. The composition tells the whole story in sequential order instead of being confined to only one part. I have to wonder why Hall didn’t choose to include the angel, as it is this intercessor from God who teaches the lesson and averts the once inevitable tragedy. Perhaps the intercessor is on the other side of the ram and only Abraham and Isaac can see them, leaving the viewer to imagine on faith alone? I think this work does a very intriguing job of telling the story while also allowing for questions related to faith and belief that directly underline the integral theme of the story.