Robert Olive Little Jackson, a Graduate Student in the Department of Art History, has been awarded the UWM Graduate School Advanced Opportunity Program Fellowship. The Fellowship has already assisted Rob in travels relating to his graduate research.

Rob is currently researching the political protest of American Indian Movement member Vernon Bellecourt, occurring at the 1992 American Quincentennial exhibition at the Science Museum of Minnesota. The exhibition featured Christopher Columbus as a hero. As a protest against the insensitive nature of the show towards Indigenous Peoples, Bellecourt threw a pint of his own blood and a mannequin representing Columbus onto a reproduction of Columbus’ ship, the Nina.

This summer, Rob traveled to the University of Oklahoma in Norman, to meet Daniel C. Swan, Curator of Ethnology at the Sam Noble Oklahoma Museum of Natural History. Swan was the Curator at the Science Museum of Minnesota (where the protest took place) in 1992. Rob met with Swan, first to interview him, but also to collect information and articles related to the show which could not be found elsewhere. Collected materials included video clips from the show, including an interview with Vernon Bellecourt, newspaper articles, correspondence with Susan Milbrath (co-creator of the Columbus exhibition), A.I.M. press releases, slides of the show, and various other exhibit related documents.

Rob plans to continue his research into this exhibit and Bellecourt’s protest over the coming year. 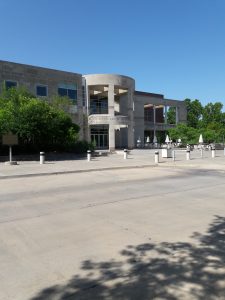