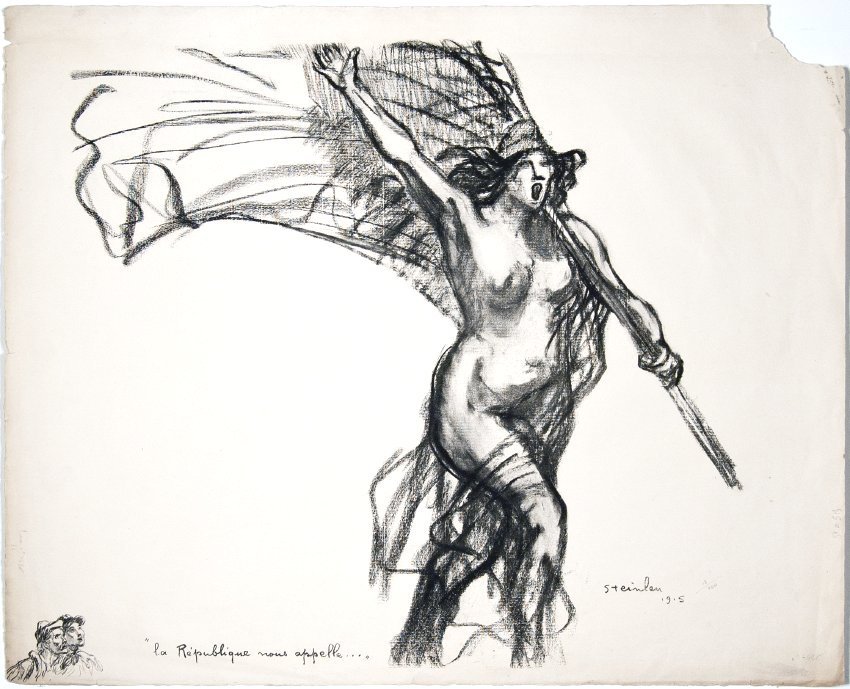 One of over 500 lithograph images produced by prolific French printmaker and illustrator, Théophile-Alexandre Steinlen, La République nous appelle presents a patriotic call to arms to fellow French citizens. Printed on a large sheet nearly 22 by 28 inches, the scene presents a classically draped, bare-chested female figure, sporting an adaptation of the Phrygian cap. Her right arm is raised above her head attracting attention; her left arm supports the French flag. She powerfully strides forward and opens her mouth to shout a call to the public. Though composed slightly off-center the female figure dwarfs the scene and draws the eye solidly to her form. In the very bottom of the lower left corner two, somewhat ambiguous figures, are sketched looking on in awe apparently riveted by this powerful female figure.

From the hierarchy of scale, classical drapery, and bare chest, one can deduce this female figure is intended to be read as an allegory, a common visual technique to represent an idea or symbol in a figure. The title of the print hints at this very identification with the use of “The Republic” in the title. The figure, therefore, is aligned with the Republic of France, whose figural representation is called Marianne. The first appearance of Marianne appears early in 1790 and is believed to be a merging of the allegorical figures of Liberty and Reason. This pointed selection of a female figure comes in contrast to the male allegory previously used for the kingdom of France under the monarchy. The feminine nouns for liberty, reason, and republic likely also contributed to the transition to a female allegory. Marianne’s image was commonly portrayed holding a pike and wearing a Phrygian cap – a conical bent over hat that was a misguided revival of ancient Roman iconography that became associated with freedom and liberty. The confusion originated from the similarity of the Phrygian cap to the ancient Roman pileus hat – which appears without a bent end – that was given to freed slaves in late Republican Rome. The bent Phrygian cap, and the association with freedom, appears in several personifications of countries in addition to Marianne, including the United States’s “Columbia.” The image of Marianne, what she wears, what she carries, and her pose has been adapted throughout French history to present a distinct theme or tone dependent on the age and intended messaging.

With its resemblance to Eugène Delacroix’s 1830 painting July 28: Liberty Leading the People,  Steinlen’s La République nous appelle can easily be read as patriotic and nationalistic – a call to arms to its citizens. Marianne carries what appears to be the French flag, though without color it is not as easily distinguished. She strikes a powerful, engaging pose, and her open mouth compels the viewer to imagine the sound of her voice and the message of her cry. The composition of the piece further adds to this reading with the central placement and hierarchy of scale impressing upon the viewer the figure’s importance. Additionally, the empty background focuses our attention solely on her. The two figures in the lower left corner redirect our wandering attention back to Marianne by their upturned gaze. The singular figure, titled La République, was a reminder to the 1915 viewer that there was only one republic entangled in The Great War, France. The scene emphasizes that she, and the freedom she represents, is special and worth fighting for. The year 1915 was not far removed from the Franco-Prussian War of 1870-1871 during which France was occupied and subsequently lost the regions of Alsace and Lorraine. Fighting for the French Republic in order to maintain its freedom was of utmost importance and this image would have certainly resonated with the French public.

Though the patriotic call to defend the French Republic is a compelling interpretation, when the image is studied in isolation, there is an equally captivating secondary reading. Depending on when in 1915 La République nous appelle was designed and printed, it was about a year into World War I. France entered the war early and soon found itself suffering heavy losses. Numerous soldiers were lost and the intensity of the fighting led to the destruction of many towns across France. Poverty and death were running rampant throughout the country. At various points during the war, Steinlen and other illustrators, were commissioned to produce patriotic and nationalistic propaganda for journals, posters, and newspapers. One likely example of this patriotic genre is represented in Mobilization or La Marseillaise. In this image the figure of Marianne is presented as a fierce winged warrior, sword drawn, decked out in armor, and arm powerfully raised above her head. This image, a strong reminder of The Winged Victory of Samothrace – a representation of Athena Nike – is striking and no doubt compelled many to defend their country when it first appeared. We can see in Mobilization that figure has clearly succeeded in calling an army to follow her to battle, thus highlighting her power and reinforces the success of her propagandistic message. By contrast, the nearly nude, solitary, unarmed Marianne figure in La République nous appelle appears unsuccessful in her call, and unprepared for battle as her message echoes in the absence of an army. In comparison, it could be read that Steinlen intended for a La République… to convey a different, charged message.

In the late nineteenth century, Steinlen had been much better known for his illustrations for leftist periodicals than for nationalistic scenes. These depictions often represented those who were disenfranchised by the government. He produced numerous images focused on poverty and often criticized the government and the bourgeois for contributing to the plights of the working class. Though Steinlen was commissioned to produce nationalistic images during World War I, given his previous critiques of the government, it begs the question whether he truly agreed with these nationalistic representations. During World War I, many French artists including Steinlen at times, turned to the negative impacts of the war as the subject for their artwork. Through this critical contemporary lens, the unique, heroic, and powerful allegory of Marianne as the sole republic and embodiment of liberty worth taking up arms to defend, instead can be read as a lone, unarmed and vulnerably unprotected figurehead pleading for help to the only citizens who are left – the old and the young, both of whom are unfit to defend the crumbling and defeated republic.

This Art Exposé research was originally presented to the public on October 8th, 2019