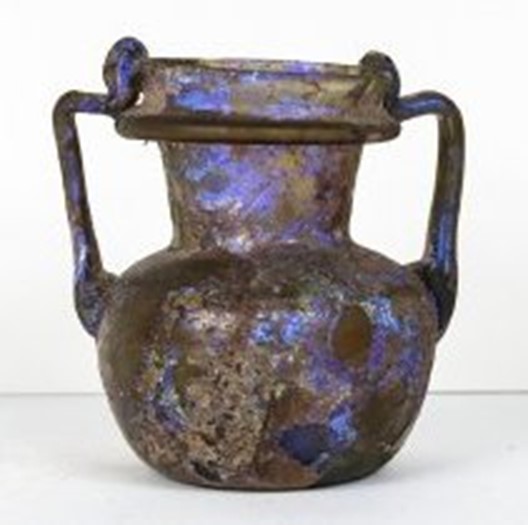 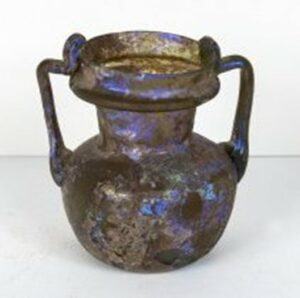 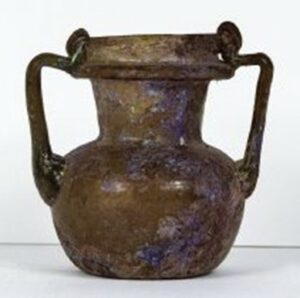 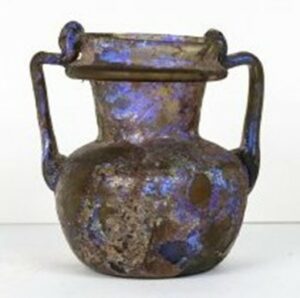 This small (H-3.5” x W-3.625” x L-3″) Imperial Roman glass jar was acquired by the Emily H Mathis Gallery in 1979. The jar is blown glass (rather than mould-made, made clear by the lack of evidence of mould seams) with two attachments as handles and is typical of jars of this period from the Eastern Mediterranean, particularly Syria and Palestine. While I have an introductory background in modern glassblowing, what I found interesting in researching this piece, where there are few detailed elements, was understanding the earliest stages of glassblowing. Glass has been in production for thousands of years, likely since the 3rd millennium BCE (ca. 3000-2000 BCE) and has been used in the production of all sorts of objects (such as vessels and beads), however, it wasn’t until the beginning of the 1st century BCE that evidence, from a workshop in Jerusalem, of blown glass appears! In the early years of glassblowing, workshops on the Eastern Mediterranean coast, especially the city of Sidon (located in modern Lebanon), show the widest variety, use, and experimentation of blown glass objects. By the 1st century CE, however, Rome takes over as a major production center for blown glass – as is evidenced by a considerably greater variety of glass objects now being produced on the Italian peninsula.

While there is not any noticeable decoration – as there are on similar pieces from different collections (see Johns Hopkins Archaeological Museum and Israel Museum) – the collar-like approach to the rim of the vessel is typical of Eastern Mediterranean glassware, refuting a claim from the 1930s that this object was ‘Pompeiian’. As someone who more commonly engages with Bronze Age Aegean ceramics, I felt inclined to try and understand its form and function – especially given the lack of decoration. In this case I landed on the term aryballos, which is a form characterized by a rounded or spherical body, thin neck, flared rim, and usually a single handle. This form is also often used in reference to very small vessels that frequently hold oils, perfumes, or other precious materials. Given this vessel’s size and shape, it seems appropriate to define it as an aryballos. I think it’s also important to note the likely function as an object holding precious materials. Other like objects have been known to have organic stoppers (such as wax coverings) which help seal in the material but the stoppers themselves often degrade and are lost.