Brazilian Art in the Classroom 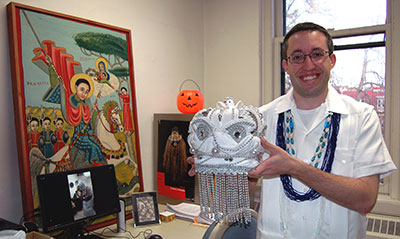 On Monday, November 10, Visiting Assistant Professor Matthew Francis Rarey brought a Brazilian crown and ritual beads into his  ARTHIST 317: African Art class.  The crown (called an ade) is used in the African-inspired Brazilian religion of Candomblé Nagô. During Candomblé ceremonies, some initiates of the religion enter a state of trance or spirit possession, when their body is occupied by one of a number of spirits called orixás. After the spirit enters, initiates’ are taken to a back room and dressed in clothing appropriate to the orixá now present in their body. These often elaborate dress ensembles are capped by ritual crowns like this one. This ade, produced in the Madureira neighborhood of Rio de Janeiro, was made for the orixá Oxalufã, a revered and elderly creator deity intimately associated with the color white.

At ceremonies, most Candomblé​ initiates dress completely in white, and also wear a set of ritual beads to indicate which orixás ​are most important in their lives. Professor Rarey is wearing light blue beads dedicated to Yemanjá, orixá of salt waters and motherhood; dark blue beads for Ogum, orixá of metalsmithing and associated with warfare; and white beads for Oxalufã. These beads were produced by artists in Salvador da Bahia in northeastern Brazil, the epicenter of Candomblé practice.