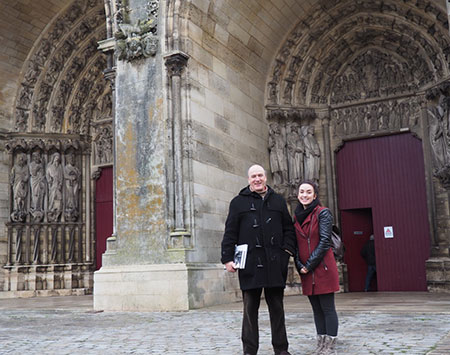 Graduate Student Abby Armstrong is writing her thesis on the Saint Elizabeth of Hungary Chapel in Laon Cathedral, in Laon, France, by the late medieval woman, Joan of Flanders, under the supervision of Associate Professor Richard Leson. Thanks to the generous contribution of the Jeffrey R. Hayes Award, she traveled to France this past January to visit the chapel in Laon.

Abby reports, “After several months of communication between myself and Claude Bono, Secretary for the Friends Association of the Cathedral of Our Lady and the Church of Saint Martin, we agreed on a date during my travels in France to visit Laon and gain access to the Saint Elizabeth of Hungary Chapel in Laon Cathedral.

Upon my arrival in Laon, Claude showed me around the hilltop town, pointing out other significant monuments within the old medieval walls. Laon, during its medieval heyday, served as a major hub of intellectual innovation, offering salvation and protection to any ecclesiastical official who chose to study with the Canons of the Church. Claude brought me to his panoramic favorite view of the Cathedral, before heading to the middle of the town.

Once in front of the immense façade of Laon Cathedral, Claude and I admired the ever-watching oxen decorating the bell towers of the cathedral. Once inside, we went directly to the Saint Elizabeth of Hungary Chapel, the central component of my thesis research. In the chapel, Claude provided me with ample light as I photographed the space and observed the sculptural relief inside. This relief contains an exceptional combination of iconographies: a Eucharistic Man of Sorrows, and Saint Elizabeth of Hungary with kneeling canons. This assemblage of images and their iconographic significance is one of the keys in understanding the motivations for the patronage of this chapel by the fourteenth century medieval woman, Joan of Flanders. And while the space is (sadly) used for storage today, visiting and engaging in the space allowed me to take part in an esteemed and unforgettable hands-on research experience. On top of this, I was able to gain many important images for use in my impending thesis.

After my time in the chapel was complete, Claude gave me a private tour of Laon Cathedral, where I gained access to private spaces with in the church. Claude took me around the cathedral and spoke about the stained glass and the connections to the canons. Then, we climbed up to the gallery level–first to see the massive organ, and then around one side of the Interior where they keep some of the original statuary. Before I left, he took us into the Mary Magdalene Chapel, where there is an original wall painting from the twelfth century and we walked through the cloister (which was unforgettable!). He ended the tour by showing us his favorite part of the cathedral which was the baptismal font.

Traveling to the sleepy medieval town of Laon allowed me to experience the medieval space central to my thesis research. I left the town feeling more connected to my research, and energized to continue my writing.”

Congrats to the Fall 2016 MA Graduates!

Women of the Page