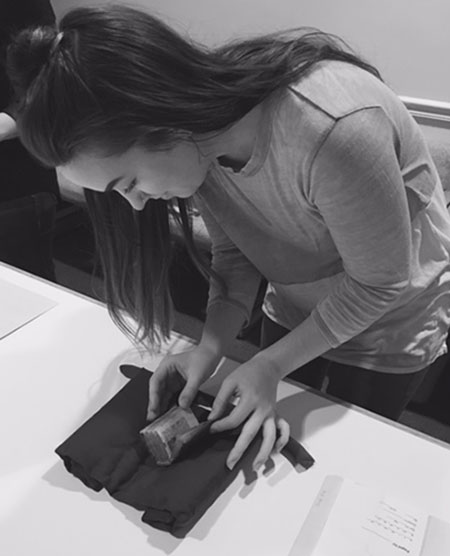 This semester, graduate student and teaching assistant, Abby Armstrong, has been attending a Newberry Center for Renaissance Studies ten-week Graduate seminar, entitled “Gender, Bodies, and the Body Politic in Medieval Europe”, at the Newberry Library in Chicago, IL. The seminar, under the instruction of Loyola University Chicago professor Dr. Tanya Stabler, covers a myriad of topics not limited to the development of medieval gendered systems and symbols, as well as the forms of knowing and intellectual authority, spirituality, political authority, and political theory.

During her time at the seminar, Armstrong interacts and evaluates a plethora of primary source documents, such as: political tracts, sermons, saints’ lives, mystical treatises, and taking advantage of the Newberry library’s extensive collection of manuscripts, scrolls, and incunabula. With this research, she engages in discussions surrounding topics concerning: gendered discourses supported or weakened institutional, political, and religious authority, even in situations that seemingly had nothing to do with “real” women. The seminar investigations also move beyond “exceptional” women who exercised political power (for example royal and noblewomen), illuminating the effects of gendered symbols and discourses on institutions or spaces from which real women were increasingly marginalized (for example royal authority) or completely excluded (for example the medieval university).

Armstrong will use this research, specifically the discourse on confessor and confessee relationships and St. Elizabeth of Hungary, into consideration as she continues to write her graduate thesis on the patronage of a Laon Cathedral chapel by fourteenth century noblewoman, Jeanne of Flanders.

IN THE PICTURE
Abby Armstrong is participating in one of the many rare book/manuscript sessions in the reading rooms at the Newberry Library. She requested, Newberry Case MS -53.1, the tiniest Miniature Breviary she’s ever seen!