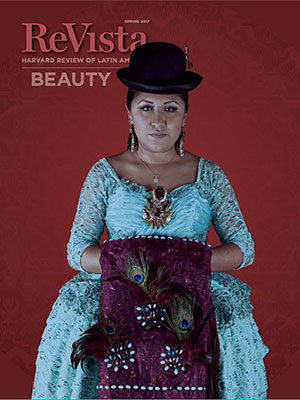 The theme of the Spring 2017 issue of ReVista, the Harvard Review of Latin America, is Beauty.  The entire issue is a great read, but I was most taken with the photo essay by Delphine Blast, “Cholitas: Revenge of a Generation.”  Cholitas are indigenous Aymara women, known for their dress including the bowler hat, pollera (skirt), shawl and braids.  Historically Cholita was a term used perjoratively about indigenous Bolivians, subjected to centuries of discrimination.

The photo essay is shot at a cholita modeling school in La Paz, where a new generation of indigenous Aymara women have up-ended the Cholita stereotype and use traditional clothing to express identity and heritage proudly and beautifully.