Decades of experience show that the English Major degree is excellent preparation for a variety of jobs and careers. Read below for more information, but for a quick update, see Paul Corrigan’s April 2019 summary, “English Majors Get Jobs.”Parents and students often ask, “What can you do with an English major?” . . .

What can you do with a degree in English? Ask, instead, what can’t you do? English majors go on to become lawyers and Supreme Court justices, managers and teachers, journalists and editors, novelists and activists. It may not be surprising to hear that Emma Watson, Conan O’Brien, Matt Damon, and Martin Scorsese are but a few of many show business celebrities that have completed their degrees in English. But did you know that renowned political leaders such as Canadian Prime Minister Justin Trudeau and Senator Mitt Romney also graduated with degrees in English? How about Nobel prize-winning scientist Harold Varmus or physicist and astronaut Sally Ride?

From research labs to corporate suites, courthouses to publishing houses, whatever field you’re aiming for, an English degree sets you apart! 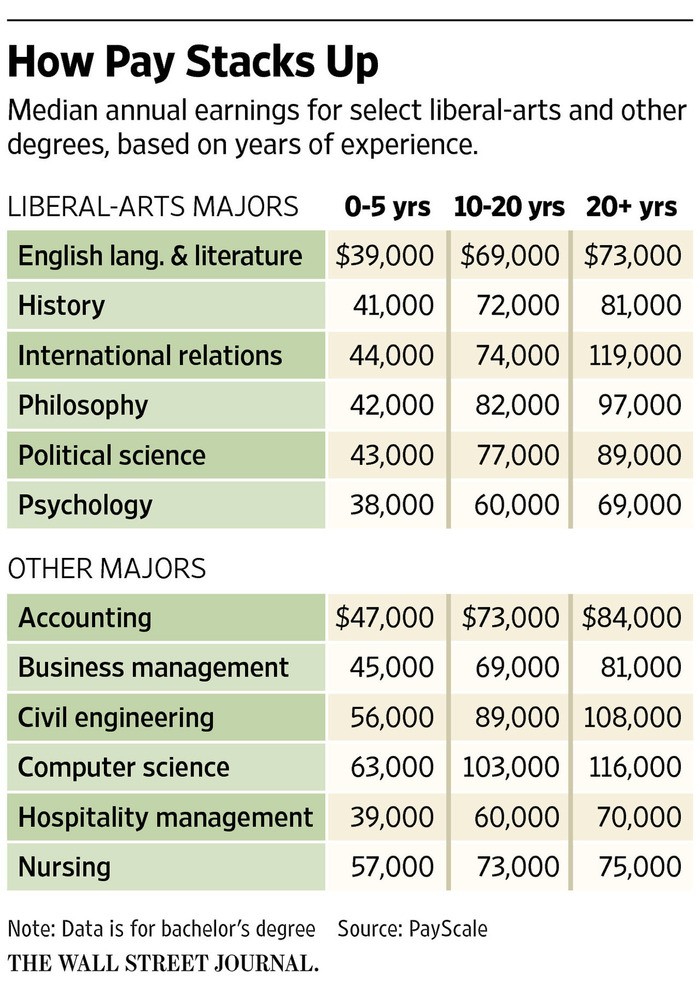 Why are such a wide range of careers open to English majors? Unlike many college graduates, their abilities to critically engage and solve problems aren’t limited to discipline-specific applications. In other words, English majors have transferable skills in oral and written communication, analytic research, and collaborative learning that are highly sought after in the dynamic and ever-changing 21st-century job market.

Data from the National Association of Colleges and Employers echo other studies. Furthermore, while liberal arts graduates may begin behind computer scientists and engineers in starting salary, they soon equal or surpass them.

When surveyed, employers say they are looking for just the kind of characteristics typical of the English major:

“Four of the top five traits were hallmarks of a traditional liberal-arts education: teamwork, clear writing, problem-solving aptitude and strong oral communications. Mindful of those longer-term needs, some employers end up hiring humanities and social-sciences graduates, even if such majors aren’t explicitly singled out when recruiting.” (Vault)

Learn more about your options and potential careers by visiting the UWM Career Planning and Resource Center.

Spend time with Paul T. Corrigan’s comprehensive and balanced article, “Want a Job with That English Degree?” for the pros and cons plus more on career opportunities.

Afraid you’ll end up making cappuccinos? Read about the myth of the English Major barista.

Plus more recent articles on careers and the English Major.

Meet with us in-person, over the phone, or via videoconference to learn more about the English program. We can even arrange a class visit to give you a taste of UWM life.