Lily Gierke, a native of Appleton, WI, joined the Alberto lab as part of the Support for Undergraduate Research Fellows (SURF) program in 2017. Lily spent that summer genotyping hundreds of bull kelp specimens collected from across the distribution of this species along the Pacific coast of North America. 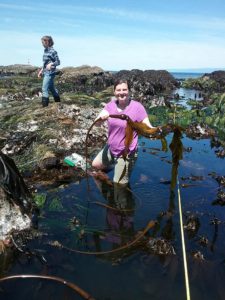 In Fall 2017, Lily began graduate study at UWM, after graduating with a dual Bachelor of Science in Biology (with Honors), and Conservation and Environmental Science, and a minor in Math. In the Alberto lab, she continued developing her undergraduate research on the population genetics of Bull Kelp. Lily added R programming and statistical modeling to her already rich undergraduate quantitative biology skillset and molecular wet lab experience during this time.

Lily received her Master’s degree in 2019 and presented her work at several national and international meetings, including the Phycological Society of America and the International Seaweed Symposium. After completing her graduate studies, Lily joined the Wisconsin Department of Justice to work in the state crime lab as part of the Forensic DNA unit in Madison, WI. In her new position, Lily has been able to put into practice her extensive experience in molecular genotyping.