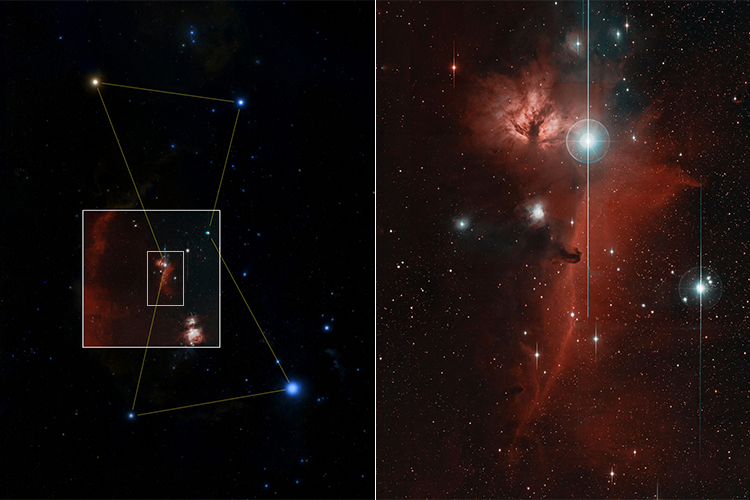 The photo at right, a "first-light" image from the Zwicky Transient Facility, shows the Horsehead Nebula. Computers searching these images for transient, or variable, events are trained to automatically recognize and ignore non-astronomical sources, such as the vertical "blooming" lines seen here. At left is a photo illustration putting that image in the context of the sky, with the lines showing part of the Orion constellation. (Courtesy of Caltech Optical Observatories)

It’s fair to say good luck played a role in the prompt discovery of an optical (and radio, X-ray, ultraviolet and infrared) counterpart to the gravitational waves from colliding neutron stars found last August.

But it’s also true that scientists don’t like to lean too hard on good luck, so astronomers have been developing a more systematic way to search for objects detected by the Laser Interferometer Gravitational-Wave Observatory.

The University of Wisconsin-Milwaukee is a partner in the Zwicky Transient Facility, the latest tool for capturing astronomical observations of short-lived, or transient, phenomena. ZTF recently saw “first light,” taking its first detailed image of the night sky. In February, it will begin a regular program of swiftly scanning the entire sky to search for cosmic explosions, such as novae and supernova. The facility is also well-suited to discovering members of the solar system, principally asteroids and comets.

And it is ideal for locating the sources of gravitational-wave events detected by LIGO.

“We were really lucky in August to have a small area to search for the LIGO event, and we found it quickly,” said astronomer David Kaplan, an associate professor of physics at UWM.

“We won’t always be that lucky,” Kaplan said. “We expect LIGO to detect more collisions like the merger of neutron stars we observed last September. The opportunity to view these at a variety of wavelengths – which is key to understanding them more fully – requires that we have a facility like ZTF to pinpoint their locations.”

UWM brings important expertise to the project. Kaplan, physics Professor Patrick Brady and postdoctoral researchers Angela Van Sistine and Shoan Ghosh, along with graduate students Deep Chatterjee and Chaoran Zhang, have devised a strategy for aiming the instrument to find LIGO events. Search efficiency is important because LIGO can’t give precise locations; ZTF will have to scan a relatively large swath of the sky in discrete chunks, referred to as “tiles” by the ZTF team, to locate the astronomical counterparts of the LIGO events.

Van is the data quality scientist for ZTF. Her job is to communicate with the users of the data, the engineering team and the image processing team.

“If the data doesn’t meet the scientists’ requirements, they’d come to me, and I’ll troubleshoot with the engineering and image processing teams,” she said.

Ghosh is working on a program to automatically prioritize and schedule follow-up to LIGO detections. LIGO provides data to his software, and the software determines the best observing schedule. That gets automatically passed along to the telescope; there’s no time for humans to make decisions.

Chatterjee is working on discovering the limits of ZTF’s ability to detect faint outbursts, and Zhang is looking to help guess in advance where to look.

“That’s important when in the future we’re attempting to calculate the rate of, for example, neutron star collisions,” said.

ZTF is a massive update to a 48-inch telescope on Mount Palomar in Southern California, with a state-of-the-art digital camera and image processing facilities. Each image covers an area of 200 full moons and is 2.4 GB in size, but can capture objects that are millions of times fainter than what’s visible with the naked eye.

Every night, ZTF will scan of about a third of the entire sky visible from the Mount Palomar, capturing electronic images in a standard array of about 400  “tiles.”  The system will compare the images to earlier images and point out any new or changed light sources. Once verified, discoveries can be shared with astronomers via networks such as GROWTH (The Global Relay of Observatories Watching Transients Happen), of which Kaplan is a member.

ZTF builds on the Palomar Transient Factory, which went into operation in 2009. In the future, even larger surveys will build on ZTF’s rapid scans of the sky. The Large Synoptic Survey Telescope is scheduled to be operational in 2023.

All this is a linchpin of the new field of “multi-messenger astronomy,” in which a variety of telescopes – from gamma ray detectors to radio telescopes – can quickly be brought to bear on short-lived cosmic phenomena like supernova and neutron star collisions. And getting LIGO involved is a key.

“The promise of multi-messenger astronomy is that you could unlock a whole new realm of physics,” Kaplan said. “The combination of traditional astronomy and gravitational wave astronomy is much more the sum of its parts.”