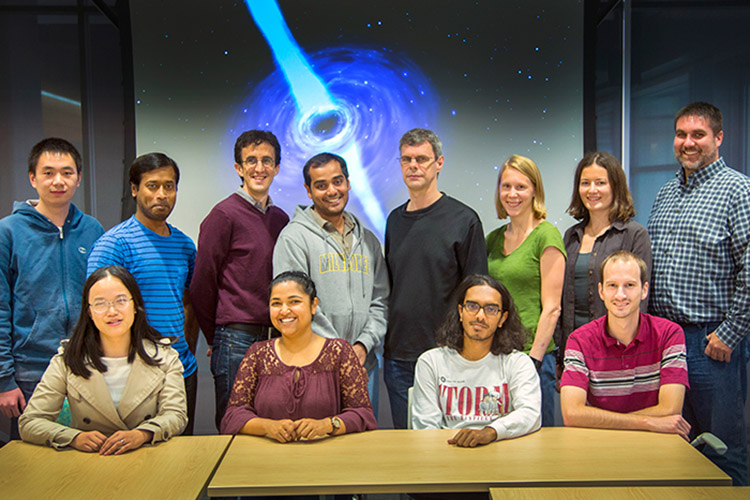 Previous detections involved the collision of black holes, which give off no light. This time, it’s neutron stars, which do.

UW-Milwaukee members of the LIGO/Virgo Collaboration were instrumental in detecting the signal from the LIGO (the Laser Interferometer Gravitational-Wave Observatory) detectors and analyzing the gravitational waves from the collision. In addition, UWM astronomers who are not members of the LIGO team played a major role in the discovery and making observations in the electromagnetic radiation.

“As exciting as first discovery of gravitational waves was, this event shows the great promise of LIGO, in terms of both broadening and deepening our understanding of the universe,” said Patrick Brady, director the Leonard E. Parker Center for Gravitation, Cosmology and Astrophysics and a member of the LIGO team at UWM. “We’re thrilled about the science we at LIGO will be able to do, but also excited by the discoveries made possible for our colleagues working in the electromagnetic spectrum.”

On Aug. 17, a LIGO scientist noticed that the computer had flagged an interesting signal that had the character of a collision between orbiting neutron stars, but it came from only one of the two LIGO detectors.  Normally such a detection requires both detectors, but the scientist noticed that NASA’s Fermi Gamma-ray Space Telescope also detected a burst of gamma rays at the same time.  These signals were unlikely to be coincidences, and LIGO soon found the signal in the second LIGO detector. The Virgo detector in Italy made it possible to determine the location of the event with relatively high precision.

The gravitational scientists notified their astronomical colleagues who, using a new catalogue of relatively nearby galaxies, found the explosion only 10 hours after it happened in NGC 4993, a galaxy about 130 million light-years away in the constellation Hydra. The identification allowed observations of the event in a wide array of wavelengths, employing traditional optical observatories, radio telescopes and satellites.  All told, hundreds of astronomers around the world, using telescopes on all seven continents and in space, followed this event frantically as the source disappeared into twilight.  And UWM was right there in the middle of it.

Scientifically, the observations promise to:

The combined observations promise to dramatically enhance our understanding of ways the primordial elements – hydrogen and helium – are transformed into the stuff from which planets – and we – are made. In particular, it illuminates processes that create elements heavier than iron – including precious metals like gold, platinum and so-called rare-earth elements – whose origin has been something of a mystery.

David Kaplan, a radio astronomer and associate professor of physics at UWM, is a participant in GROWTH (Global Relay of Observatories Watching Transients Happen), a worldwide network of observatories organized to capture gravitational wave events in the electromagnetic spectrum. A co-author on the paper describing the findings of various electromagnetic observations, Kaplan said the event offered an unprecedented opportunity to observe the conditions under which heavy elements can be synthesized.

“We’ve never witnessed a collision between binary neutron stars,” he said. “We believe we’re seeing the creation of elements whose origin has been a mystery up until now.

“We’re seeing these elements being created, and we’re also starting to get a better handle on how they are being made.”

“This event could create a mass of gold equal to the mass of Saturn,” Kaplan added. “Imagine a sphere three times the size of Earth, but 100 times more massive – that’s the amount of gold we’re talking about.”

Jolien Creighton, who leads the LIGO effort to detect and measure massive binary collisions, said the observation of the collision of neutron stars offers a window into some of the most exotic matter the universe has to offer.

“We’re talking essentially about giant atomic nuclei,” Creighton said. “We know they exist, but the physical laws that govern them have been difficult to pin down.

“This sort of observation is going to help us understand these objects and the fundamental nature of dense matter.”

Brady highlighted other notable implications of the discovery.

“There are phenomena, known as short gamma-ray bursts, whose origin was unknown,” Brady said. “Based on what we saw in August, it’s pretty clear that they are in fact colliding neutron stars.”

“We get to test if gravity travels at the same speed as light,” he said. “And we have a chance to get a better handle on the rate at which the universe is expanding, which in turn will help make better measurements of distances in the universe.

“And we’re just getting started,” Brady added. “We expect to learn more as our analysis goes on — and there’s always the potential for the unexpected.”