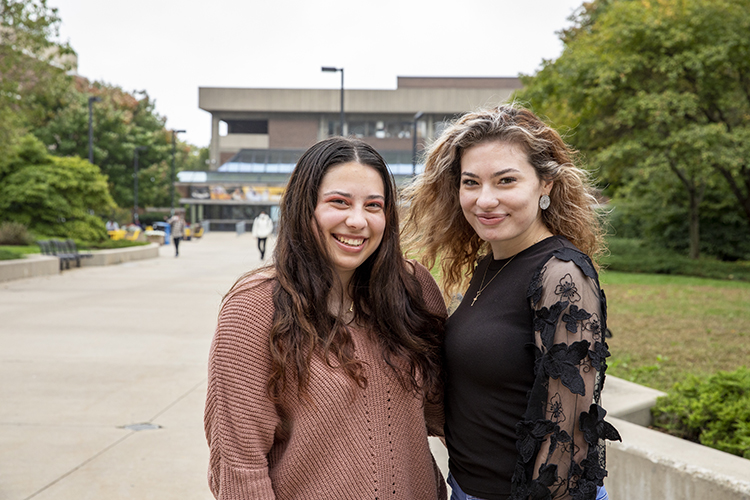 Freshman Lucianbella Muro (left) and sophomore Filumena Muro are the great-granddaughters of Marla Anderson, who left a legacy of activism at UWM. (UWM Photo/Troye Fox) 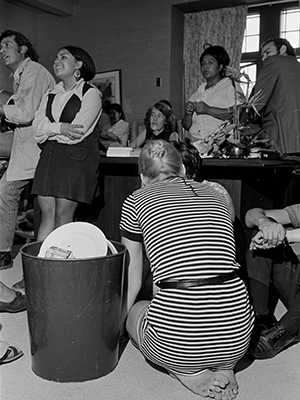 Protesters, including Marla Anderson (center, sitting at desk), occupy the chancellor's office during the August 1970 demonstrations leading to the establishment of what is now the Roberto Hernandez Center at UWM. (UWM Photo Services) 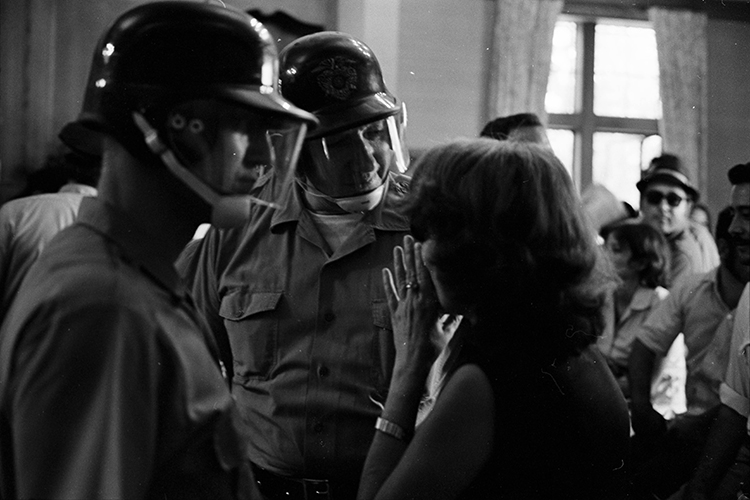 Marla Anderson speaks with police shortly before her arrest during the August 1970 demonstrations leading to the establishment of what is now the Roberto Hernandez Center at UWM. Anderson was one of five people arrested during the demonstrations. (UWM Photo Services) 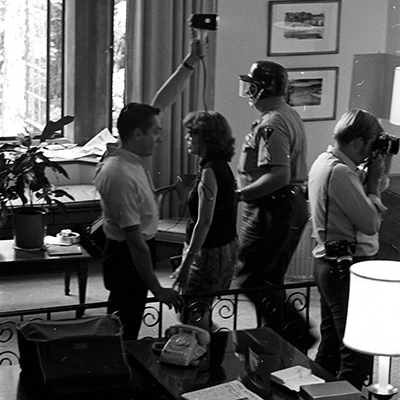 Police lead Marla Anderson away after her arrest during demonstrations that led to the establishment of what is now the Roberto Hernandez Center at UWM. (UWM Photo Services) 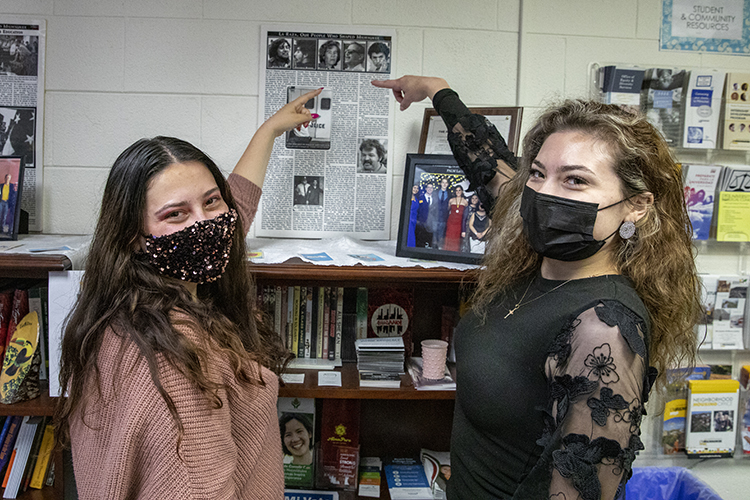 Lucianbella Muro (left) and Filumena Muro point to a 1970 news story about their great-grandmother, Marla Anderson, and others who were arrested during demonstrations at UWM. (UWM Photo/Troye Fox) 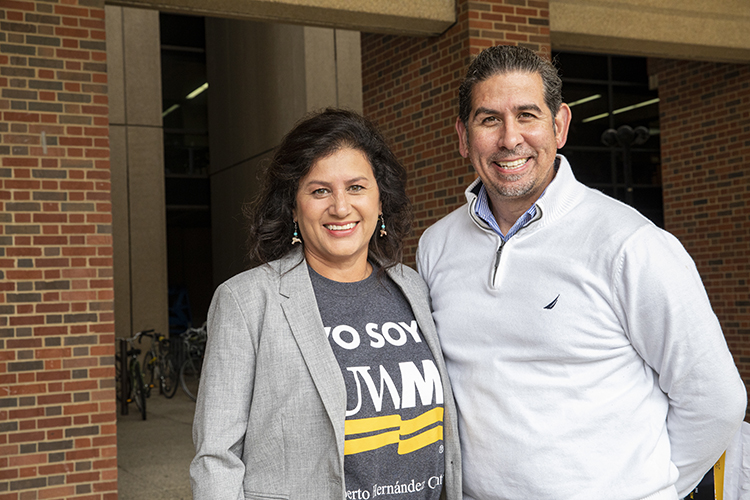 Filumena Muro is reminded of the impact that her great-grandmother had at UWM every time she steps inside the Roberto Hernandez Center.

On the wall just inside the front doors to the center that serves Latinx students is a reprint of a newspaper story that spotlights people who shaped Milwaukee. It includes a photo of the late Marla Anderson. She was the only woman among the five people arrested in 1970 during peaceful protests on campus demanding more support for the Hispanic community.

Today, her great-granddaughter and the center provide proof of Anderson’s legacy.

“What really did inspire me was that she made her mark on the world,” Muro, a sophomore, said about why she came to UWM. “Here, I plan to do that as well.”

More than five decades after the protests, Latinx students are one of the fastest-growing segments of the population at UWM and graduating at record-high rates.

More than 2,900 students of Hispanic ethnicity at were enrolled at UWM in Fall 2020, according to the most recent data available from UW System, making up 11.8% of enrolled students.

That’s more than double the 1,400-plus Hispanic students enrolled at UWM in 2008, when the current categories for race and ethnicity were first used by UW System. Hispanics at that time made up 4.1% of the student population.

The increase mirrors trends seen across the country. Data from the U.S. Census Bureau’s American Community Survey during the four-year period of 2015-19 shows that 16.4% of Hispanics age 25 or older had a bachelor’s degree, up from 12.6% in in 2005-09.

The rise comes as the Latinx population booms across the United States. In Wisconsin, while the state’s population is still primarily white, the white population declined 3.4% in the 2020 census, while the Hispanic population rose by 33.1%.

Alberto Maldonado, director of the Roberto Hernandez Center, said the growth sparked the creation or expansion of charter schools or faith-based private schools, as well as growth in public school enrollment that may draw interest from Hispanic families.

“We began to see tremendous growth in enrollment at the K-12 level both here in Milwaukee and nationally,” said Maldonado, who is also the co-lead of the Chancellor’s Committee for Hispanic-Serving Initiatives at UWM.

“And then colleges began to pay attention to the growth and began to make intentional investments in recruitment and retention, and creating partnerships with various (school) districts with which we’re seeing this growth,” Maldonado said.

More work to be done

Much more work remains to be done. The six-year graduation rate for Hispanics at UWM of nearly 40% trails the rate of 50% for white students, according to UW System data.

UWM has committed to eliminating disparities so that students of all races and ethnicities graduate at the same rate by 2030 through the Moon Shot for Equity initiative. The university is looking to achieve a comprehensive series of goals, like streamlining financial or administrative holds that can prevent a student from enrolling in classes, or offering retention grants up to $500 to help low-income students or others in need who are in their junior or senior years.

Creating a safe and welcoming environment and promoting diversity and inclusion also are key focus areas of UWM’s 2030 team, which is setting a blueprint for the university’s future.

Patricia Torres Najera, the other co-lead for the Chancellor’s Committee for Hispanic-Serving Initiatives, said the group recently met faculty and staff to discuss outreach that could build on the positives in enrollment and graduation trends.

“There is great momentum. The data says it all – Latinx students like UWM,” she said. “What are ways that can we offer more support to students, and community activities too.”

There also are positives to build from in terms of how far support systems have come since Anderson helped to lead the 1970 demonstrations that led to what is now known as the Roberto Hernandez Center.

Originally from Mexico, Anderson graduated with a bachelor’s degree from the School of Education in 1978 and raised six children. Her legacy includes two great-granddaughters at UWM: freshman Lucianbella Muro and her older sister, Filumena.

“My great-grandmother really inspired me to begin this journey of attending college,” Filumena said. “She showed me the value of having a good education here no matter what, no matter how hard the journey was or will be.”