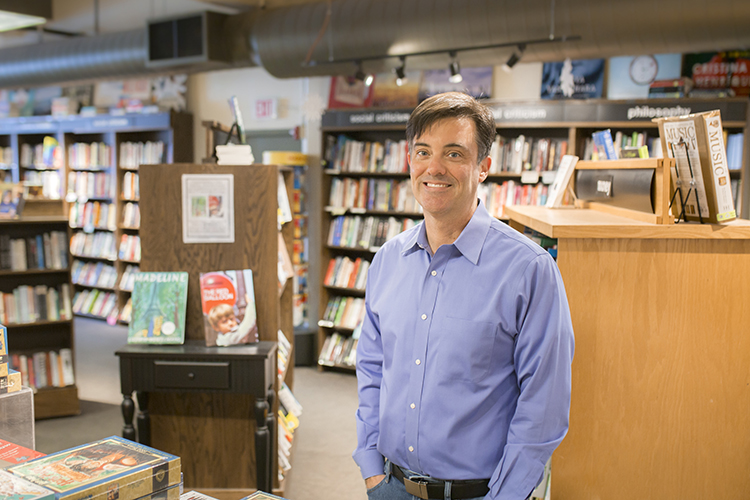 Liam Callanan, professor of English at UWM, will talk about his new novel, "Paris by the Book," as keynote speaker at the Southeast Wisconsin Festival of Books Nov. 2-3 at UWM's Waukesha campus. (UWM Photo/Elora Hennessey)

UWM English professor Liam Callanan, whose third novel, “Paris by the Book,” was published in April, will be one of two keynote speakers at the Southeast Wisconsin Festival of Books.

The festival, now in its ninth year, brings together the literary and arts communities to the University of Wisconsin-Milwaukee at Waukesha. This year’s festival, which runs Nov. 2-3, celebrates the theme of American stories.

“I have been attending and taking part at the festival for a number of years,” Callanan said.

Callanan will talk about his new book, which is full of mystery, intrigue and passion, set in the magical city of Paris. The story sets out with Leah Eady packing up her life and her two daughters to go find her missing husband in Paris, where she thinks he has gone to finish up his manuscript.  The story traces the paths of Parisian classics “Madeline” and “The Red Balloon” as Leah searches for her missing husband while taking over a struggling English-language bookstore.

The bookstore in the novel is inspired by a real-life encounter Callanan and his family had while in Paris a few years ago while he was researching the city and children’s books.

“My family and I entered a bookstore in Paris that was on the verge of closing for good,” Callanan said. “The proprietor offered to sell it to us. We turned her down, but in the book, I take her up on it.”

The festival features several ticketed events where authors will hold a reception beforehand and then talk about their recently published books, including local authors Nick Petrie with his mystery thriller novel “Light It Up” and Kathie Giorgio and her memoir “Today’s Moment in Happiness Despite the News: A Year of Spontaneous Essays.”

Petrie will be the other keynote speaker.

Everything at the festival is free and open to the public unless events are otherwise specified. The two days of the festival are packed with panels, interviews and Q&As with local and traveling members of the literary community.

“I’ll talk about how my book came to be,” Callanan said, “and share a Paris secret or two along the way – including the real-life mystery of what happened to the bookstore we failed to buy.”

Upcoming and aspiring authors can find inspiration and support at the festival from the panels, ticketed events of published authors (many from Wisconsin), and the Writer Marketplace, where emerging authors can rent a booth to promote their books.