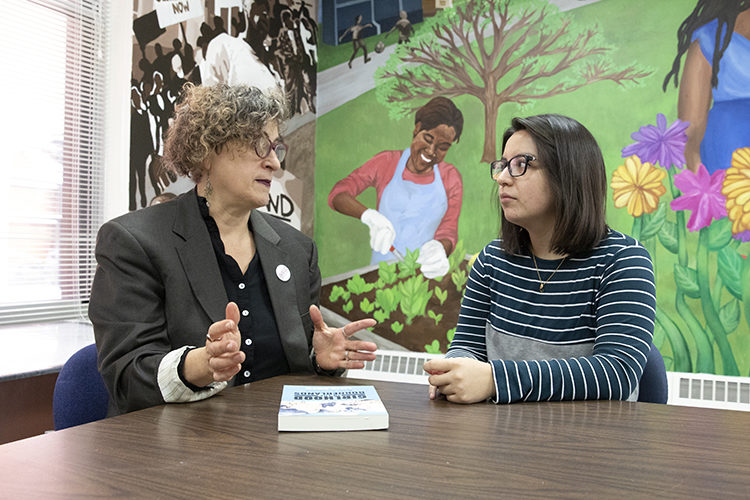 Rachel Ida Buff (left), a UWM professor of history shown here working with undergrad researcher Margarita Garcia-Rojas, has spent much of her career looking at issues of migration and immigration. (UWM Photo/Troye Fox)

The complex issues surrounding immigration have moved a little out of the spotlight of media coverage during the current focus on the coronavirus pandemic and issues of racial justice.

However, immigration policies are still affecting thousands of people who are sitting in border camps hoping for asylum or living in the U.S. in fear of deportation.

Rachel Ida Buff, a University of Wisconsin-Milwaukee history professor, looks at the issues in her latest book, “A is for Asylum Seekers: Words for People on the Move/A de Asilo: Palabras para personas en movimiento.”  The book, with facing pages in English and Spanish, is due out in August.

The book is not just a glossary of terms, but an exploration of the historical and political context of all the words that have become a familiar part of the discussions, everything from “asylum” to “sanctuary” to “xenophobia” to “zero tolerance.” As the Amazon summary puts it: “…in a world where the differences between ‘undocumented migrant’ and ‘asylum seeker’ can mean life or death, words have weighty consequences.”

“The book looks broadly at how people from other countries wind up in this country, pretty much from colonial times to the present,” Buff said. However, two-thirds of it focuses on contemporary happenings and their ties to history. For example, she writes about whether the current deportation sweeps have any legal precedents, among them some of the powers that accrued to federal agencies due to fugitive slave laws.

Over the years, her research has looked at broad issues of migration and immigration – the dispossession of native peoples, African American migration to the north in search of jobs, the migration of people from Dust Bowl Oklahoma to California for better opportunities.

However, her work in the past year has focused on foreign-born people and their rights or lack of access to rights, she said. She is also an activist on the issues, serving as a board member of Voces de la Frontera, a local immigrant rights organization, since 2004. She also serves on a campus task force for undocumented students, and has made numerous trips to the U.S. southern border to research and write about  conditions and issues among those in migrant camps.

She notes that Milwaukee’s immigrant population is diverse. “We’re talking about Rohingya (from Burma/Myanmar) and, in Milwaukee and throughout the state, Somali and East African too. These are people in particular towns who’ve been drawn there because of family or industry.” The state’s dairy industry is heavily dependent on Latinx workers, forcing local communities to find a balance between enforcing rules and keeping the economy running.

On campus, immigration policies affect not just DACA (Deferred Action for Childhood Arrivals) students who came to this country as children, but also students from countries where travel bans have restricted their ability to visit or return to their homes.

Asylum and refugee policies, passed in the U.S in 1980, were almost immediately corrupted by the Reagan administration, according to Buff.

Now the situation has changed, with tens of thousands of people sitting in camps on the southern border awaiting asylum hearings or unable to continue their studies and their lives because of uncertainty about their legal status.

“This stuff that’s happened under Trump is science fiction; telling people who are fleeing Guatemala that Guatemala is where they should seek refuge,” Buff said. “I mean it’s just like a bad joke, except it’s real and people die.”

“The deportation terror” is very real in immigrant communities, she added. “I’m sure studies can show that kids are harmed by having that terror of coming home and finding nobody there – they have that in the way people in my generation grew up in fear of the nuclear bomb. That’s generational trauma.”

Buff’s latest book is written in a scholarly and popular vein, designed to serve both as a textbook and to appeal to high school and college students, she said. It’s a way to generate discussion among students and, sometimes, their families.

Last semester, she taught a class titled “Guarding the Golden Door: Immigration and Refugee Policy.” Her students were generally liberal and interested, but in discussing it at home, some families were concerned about the class. “It was seen as controversial in many households, but that’s where we are.”