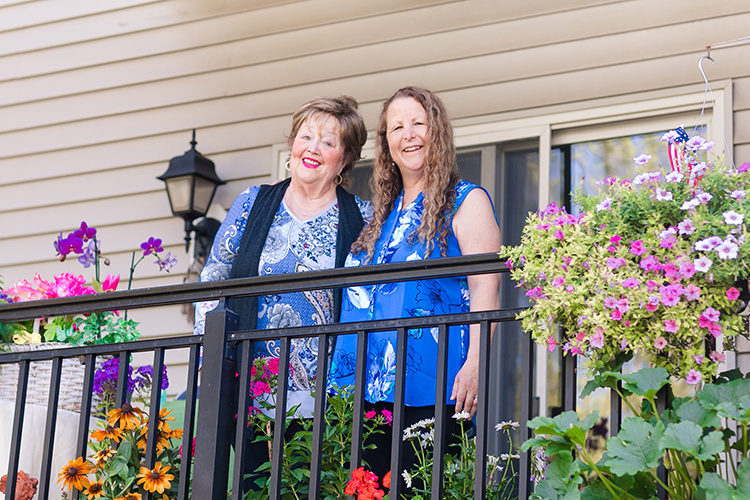 Ellyn Lem (right), a professor of English at UWM at Waukesha, visits with her mother, Joanne Wagner, at Wagner’s home at a senior community in Waukesha. Lem recently published a book that examines the nuances of aging through film, literature and other works of art. (UWM Photo/Elora Hennessey)

Ellyn Lem sees the aging process as more than the black-and-white issue in which it is often portrayed in pop culture.

Getting older isn’t just about moving into a retirement community and “over-the-hill” balloons for birthday parties. It’s also not just about finding the latest elixirs or exercise routines to stay fit or maintain a youthful complexion.

The reality lies somewhere in between, said Lem, a UWM professor of English. In her new book, “Gray Matters: Finding Meaning in the Stories of Later Life,” she examines the nuances of aging through the lenses of film, literature and other works of art that focus on life for those 65 and older. Many of the works that she studies were created by older adults themselves.

“We are so much a culture that glorifies youth, and yet we are about to have a society dominated by those older than 65,” said Lem, who is based at UWM’s Waukesha campus.

“There are now novelists and filmmakers turning their attention to the latter years in life,” Lem added. “I want to look at how they help show us certain truths about the aging process but also how they might obscure it.”

She hopes to provide important insight for young and old alike as the U.S. population overall gets grayer thanks to the aging of the massive baby boom generation. All baby boomers will be at least 65 by 2030.

According to U.S. Census Bureau projections, the number of people 65 and older will outnumber those younger than 18 for the first time in the country’s history by 2034.

Lem got some inspiration a couple years ago after making trips to a bookstore. She was looking for titles about long-term care for older parents following conversations with her mother.

“The funny thing is that there are walls of books about raising children,” Lem said. “But in terms of books about understanding aging, they are in a tiny, little section and half of them are about death and that’s it!

“That was really the germ behind my book, about how little that most people know about the aging process and how it affects us all.”

A stark portrayal of a queen

One section in her book looks at the works of the late British painter Lucian Freud, including his self-portraits that highlighted his wrinkles and craggy facial features. Freud was also known for a painting of Queen Elizabeth in 2001 that drew controversy for its, stark, up-close portrayal of the British monarch.

“It doesn’t make her look like a kindly grandmother,” Lem said. “You see imperfections. Those who were critical of the work argued that it didn’t look regal enough.”

But, Lem added, the work can also be appreciated for portraying the queen as human being with depth and complexity.

Lem also draws from gerontology research and an in-depth surveys with older adults on their life experiences. Lem didn’t quantify responses, but did pull out some examples of answers.

One survey question was “What is one piece of advice you would give your 21-year-old self?” The answers included:

Among other cultural works, Lem looks at the movie “Lucky,” which was released weeks after lead actor Harry Dean Stanton died in 2017 at age 91. The comedy-drama is described as following the spiritual journey of Stanton’s character, who is an atheist, and the other quirky residents in the isolated desert town where he lives.

“It shows both that he’s not in the greatest of health, that things are a struggle, but that he also loves his independence,” Lem said. “That’s what I hope to show in a lot of my examples – here are some ways that getting older is a problem, but these are some of the positives that people have taken away from it too.”

Book gets recommendation from Journal Sentinel

Milwaukee Journal Sentinel book editor Jim Higgins named “Gray Matters” as one of his 33 recommended books to read this fall.