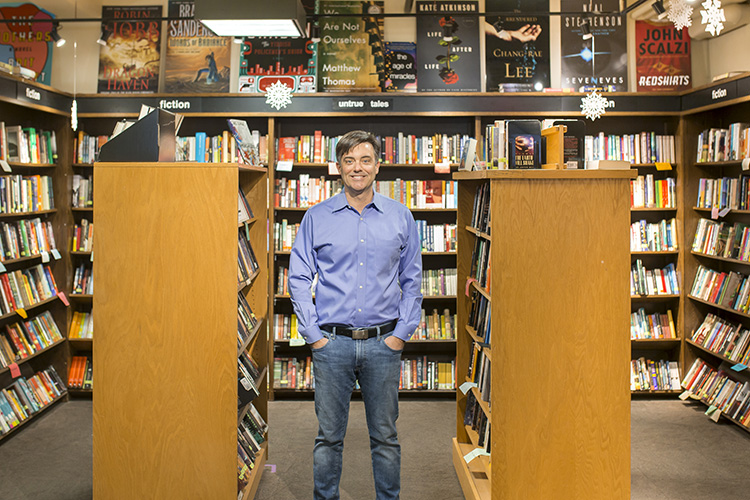 But Liam Callanan, an associate professor of English, is firmly ensconced in the “mid-coast.”

Callanan, who came of age in Los Angeles, allows that the weather is warmer there but, now enjoying his 12th winter in Milwaukee, he loves his snowblower.

Callanan, who call himself an “evangelist” for Milwaukee, is given to such observations as “Milwaukee is the new Seattle.” He’s even given the city a cameo in his forthcoming novel, “Paris by the Book,” which is scheduled to publish April 3.

Callanan, is the author of three novels and a collection of short stories, but he’s also a highly regarded teacher who won the Distinguished Undergraduate Teaching Award last fall. He teaches in the graduate Creative Writing program and has served as the program’s coordinator, as well as the English department’s chair.

He says he was bitten by the teaching bug when working on his master of fine arts in writing at George Mason University, where he also began teaching.

“It was fascinating to work with undergrads who, like me, were working on their writing,” he said.

He doesn’t adhere to the “feet of the master” style where the great one reveals all, but rather thinks of himself as a more of a personal trainer. He offers his own training for a marathon as an analogy.

“I asked a running coach to watch me run to see if I was doing anything wrong,” he recalled. “He said, “I’m not going to change the way you run; you run how you run.’

“People write how they write; I don’t want to take away anyone’s voice. I want to help them get to the point they want to get to.”

His students clearly appreciate it.

“[He’s] personable to the students and obviously enthusiastic about the material, which is infectious,” one wrote in an evaluation. “He is very intelligent, but never condescending … The most enjoyable professor I’ve ever had.”

Callanan’s interest in his students’ success has led him to take an entrepreneurial approach to literature.

“I’m very interested in literature not being locked up in the ivory tower, and getting it on the sidewalks and on the streets,” he said.

Over the years he’s launched several community initiatives, some of which are ongoing,

“Poetry Everywhere” was one of the marquee efforts – animated poetry readings created collaboratively with students and faculty from Peck School of the Arts and the English department. Working with a transit video company, they were able to place the poetry videos on public bus systems around the nation. The video company has since folded, but the project lives online.

He’s always coming up with ways to get his students’ work in the public eye.

“In April, we do ‘Eat Local :: Read Local,’  a project in which we put poems and flash fiction in the hands of diners local-centric restaurants,” Callanan said. “It’s local writers writing for local diners in restaurants with a local focus.”

The project distributes about 10,000 cards in Milwaukee and Madison. Callanan hopes  to expand elsewhere in the state.

Also, keep an eye out for “The Literary Circular,” micro-fiction and short poems appearing on the cup sleeves at The Grind coffeeshops on the UWM campus.

“I have great hopes that this will expand to coffee shops around town,” he said.

Callanan’s also looking forward to getting the arts and humanities engaged in the Lubar Center for Entrepreneurship.

“Things like that really help us engage with the community,” he said. “Ultimately, I want to make sure that our students get their words out in front of more people.

“Readers complete a text,” he says. “So, the more readers are out there, the more texts are completed.”

Callanan says UWM has been an ideal launching pad for both his Milwaukee evangelism and literary community engagement.

“We’re bringing in interesting students and interesting faculty,” he says, “and I hope we continue to invest in that, which moves us all forward.”

Moving forward is certainly a key part of Callanan’s makeup. Though he says he and his family are “woven into Milwaukee,” he’s hardly homebound.

“I have hugely itchy feet,” he says. “If I wasn’t a writer, I’d probably be a flight attendant.”

A trip to Paris with his children offered inspiration for his latest novel, “Paris by the Book.” One of their activities was tracing the steps of characters from favorite movies and books, such as “Hugo,” “The Red Balloon” and the Madeline books by Ludwig Bemelman. The itinerary is echoed in one of the novel’s episodes.

Beyond being a novelist, Callanan is also interested in, and teaches, “creative nonfiction,” encouraging people to use some of the tools of fiction to engage readers in nonfiction writing.

He is currently doing the research for a nonfiction work himself, a biography of Lester Maitland, a contemporary of Charles Lindbergh who was the first person to fly from North America to Hawaii.

“I’m fascinated by the trajectory of his life,” Callanan says. “He’s a Milwaukee boy – he went to Riverside High School – and later in life became an Episcopal priest.”

Added bonus: Callanan’s research will take his itchy feet on the road.

Read Chapter 1
of ‘Paris by the Book’

Liam Callanan’s latest novel, “Paris by the Book,” will be released April 3 by Dutton Books.

Dutton, which has made an excerpt available, offers this description of the book:

“A missing person, a grieving family, a curious clue: a half-finished manuscript set in Paris. Heading off in search of its author, a mother and her daughters find themselves in France, rescuing a failing bookstore and drawing closer to unexpected truths.”

“This charming and poignant novel made me fall in love with Paris and all things French. Oh, to own a bookstore in any arrondissement! Within this love story there are reflections on the mystery of writing, the solace of reading, the ties that bind and those that don’t, plus the joy of The Red Balloon, to name but a few of the pleasures of ‘Paris by the Book.’”