The USGS used Spring Indices models developed by Distinguished Professor Mark D. Schwartz for their recent article on the early arrival of spring this year, and trends toward very early spring onsets in National Parks. The “first leaf” maps based on the models were presented by Al Roker on the Today Show on March 2, 2017. Mark Schwartz’s Spring Indices models were also mentioned in recent articles in the Washington Post, Atlantic Magazine, and by Associated Press on climate change and the early onset of spring this year. 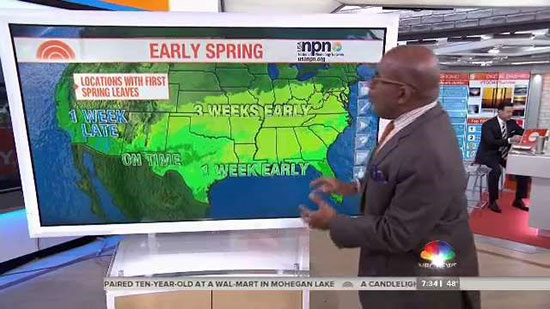 Just HOW EARLY is spring arriving in your neighborhood? Find out…, U.S. Geological Survey, February 22, 2017

What’s Dangerous About an Early Spring, the Atlantic, March 1, 2017